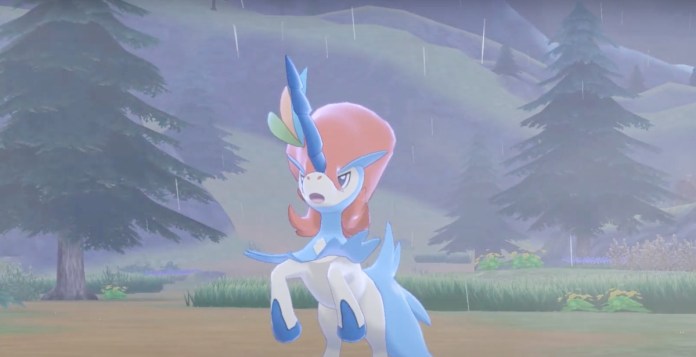 Once you complete the story, visit the tower in Wydon and speak to the person standing next to the Type Null on the first floor and they will give you the Pokemon for free.

Legendaries Caught in the DLC

Kubfu is the mascot of the Isle of Armor DLC that is given to you to raise into its final form Urshufu. Depending on which tower you visit in the story, it will either evolve into a Fighting/Dark Type or a Fighting/Water Type.

Calyrex is a Pokemon you will meet in the Crown Tundra DLC. You cannot catch him on his own, rather you must help him reunite with his beloved steed by luring him in with a carrot. If you use the Iceroot Carrot, you’ll get Glastrier. If you use the Shaderoot Carrot, you’ll get Spectrier. Calyrex and his steed are fused together using the Reins of Unity.

To start the quest to catch these three, you must visit the Dyna Tree in Crown Tundra. Here a cutscene will play with the tree birds brawling before the sound of your Rotom dex attempting to analyze them scares them off. Each one will have to be chased down in order to battle and catch it.

The Regis temples are all over Galar. Each one requires either a specific item or Pokemon to go into. When you have caught all three, you can visit the Split Decision ruins for Regieleki and Regidrago. To awaken them, you have to put the patterns of their face on the panels on the floor.

Regigigas – After catching every Regi, you’ll encounter a level 100 Regigigas in a solo Dynamax battle.

Cosmog – In the village in Crown Tundra, visit the house with the Spheal outside after Calyrex’s horse attacks the town. You’ll see Cosmog inside and if you interact with it, the old woman in the house will tell how she found it outside and will ask you if you want to raise it.

To start the quest to find these three, look for the set of footprints in Freezington. When you do, a cutscene with Sonia will begin and she will tell you she’s in the Crown Tundra for research. She will send you on a quest to find the Pokemon. To track them, follow their footprints all over the land. Each set of footprints is about two percent of data, so you need to find about fifty footprints for each one. Once you collect 100 percent of each one’s data, visit Sonia back in Freezington and she will tell you where each one is directly located.

Keldeo – After showing Sonia Virizion, Cobalion and Terrakion, you’ll want to head to Ballimere Lake. Swim out to the island in the middle of the lake and you’ll see a camping pot by a tree with some hoofprints. To get Keldeo, camp and make curry by the pot as you normally would. Afterward, Keldeo will appear walking around like a wild Pokemon would and you can now prompt an encounter.

These Pokemon are encountered through Dynamax Adventures, where trainers travel through a series of tunnels and do smaller encounters until they reach the end, where a random Legendary will be waiting. These are listed based on the region they originally came from and are marked if they are version exclusives.

Poipole – This one is unlocked after you catch 5 Ultra Beasts in Dynamax Adventures. You will see standing in the Max Lair and can add it to your team by interacting with it.