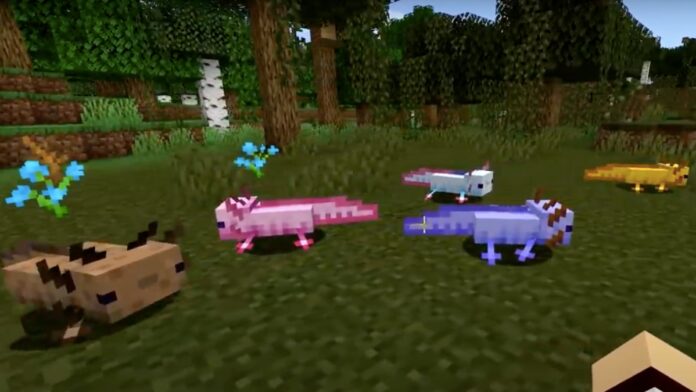 In Minecraft, players can find many mobs inspired by real-life creatures such as axolotls, wolves, pigs, cows, and more. For a long time, the game had lacked an amphibian mob. In the Caves & Cliffs Part 1 update, Mojang finally added Axolotl, the first amphibian mob. This guide talks about the rarest Axolotl in Minecraft Bedrock Edition.

Rarest Variant of Axolotl in Minecraft

Out of these five variants, blue is the rarest axolotl variant in Minecraft as it does not spawn naturally in the world. Leucistic, brown, gold, and cyan are the only variants of Axolotl that generate by default in the right conditions.

There is only one way to get blue Axolotl in Minecraft Bedrock Edition. When two axolotls are bred, there is a 0.083% chance of the baby axolotl having the blue color mutation. You can breed a pair of axolotls by feeding them buckets of tropical fish. Theoretically speaking, you will have to breed axolotls 1200 times to get a blue axolotl. But luck can perhaps be on your side, and you may get blue Axolotl early.

After obtaining one blue Axolotl, you will have an easy time getting more blue axolotls. You can breed blue Axolotl with another axolotl to create baby axolotls with about a 50% chance of having blue color.

Uses of Axolotl in Minecraft

Axolotls are mainly used as pets and decorations in Minecraft. However, do not be fooled by their adorable behavior as axolotls are pretty hostile towards almost all aquatic hostile mobs. You can bring a horde of Axolotl to your next aquatic exploration and watch them kill aquatic monsters in no time. You can use axolotls for farming underwater mobs like squids, glowing squids, etc.

Axolotls are one of the cutest mobs in Minecraft. If you are a fan of these adorable amphibians, try to get all variants of Axolotl in Minecraft.

Related: How to Summon the Rare Axolotl in Minecraft Bedrock

What is the Rarest Axolotl in Minecraft Bedrock Edition