Home Game Guides What is the Genshin Impact Christmas Cult? 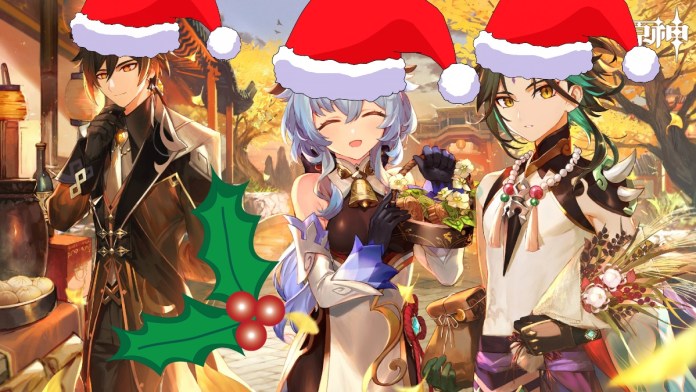 With the holidays just around the corner, mobile games are starting to announce their Christmas-themed events. Recently, miHoYo announced update 2.3 of Genshin Impact was coming, along with its holiday event that is going to take place in Dragonspine. As a result, excited players have started a trend on TikTok that has now become known as the Genshin Impact Christmas Cult.

How The Movement Started

Basically, Genshin fans on TikTok have started a trend where they put a character wearing a Santa hat as their profile picture. After doing this, the person is followed by other people doing the same thing. The members of this trend quickly became known as the Christmas Cult and it has now even spread to Twitter, with players sharing the many edits of characters in Santa hats. All you need to do to join the “cult” is make a profile picture on Twitter or TikTok with your favorite Genshin character, and you’re automatically in. Everyone is clearly excited about the events and wants to share that with other fans.

Popular iconic characters like Xiao, Kaeya, Ganyu, and Zhongli were some of the people’s choices to use as profile photos.

Some people had other festive picture ideas involving putting an adorable set of reindeer ears and noses on characters.

What To Expect In The Event

Seeing Genshin players have fun like this is a breath of fresh air, considering some of the recent drama involving people’s reactions to how miHoYo handled the game’s anniversary. There’s no word yet on when the announced Shadows Amidst the Snowstorm update will drop. One thing we do know so far, besides that it will take place in Dragonspine, is that you will be able to make snowmen as part of the festivities. According to the trailer, there seems to be a new dark force growing in Dragonspine that the traveler and friends must face off against. Another feature will be the return of characters Albedo and Eula. All in all, the winter update for the game is looking to be a ton of fun. You can see more in the trailer below.

What is the Genshin Impact Christmas Cult?