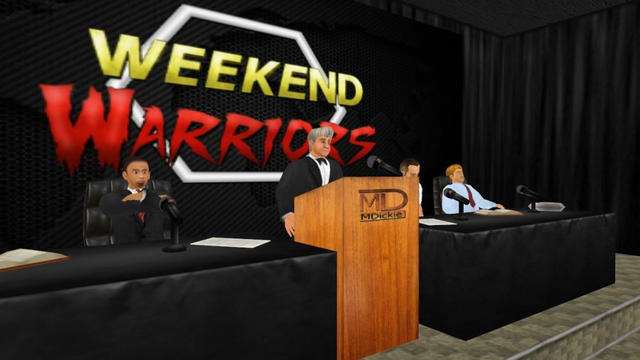 Are you ready for your own personal MMA adventure? Weekend Warriors MMA lets your MMA dreams come true! Create your own fighter and start your career. Use a variety of moves and techniques to take down your opponent with finesse and brutality! Climb the ranks and become the number one MMA fighter in the world with the help of our Weekend Warriors MMA cheats, tips and tricks strategy guide!

1. Charge up your strikes!

The “S” button, which stands for Strike, is your main method of dishing out pain! You don’t want to tap it rapidly, however. Instead, if you hold down the S button, your character will begin to charge up their swing. Letting your attacks charge for a second makes them do more damage, so it’s more efficient.

Even better, when you’re charging up a strike, you can influence the direction you swing in by holding down a direction. This is very useful if you see your opponent blocking. Are they blocking high? Try holding down and your character will hit low, and your opponent will be caught off guard. Mind-games are key here; don’t use the same moves over and over again! Be tricky!

When your opponent is just too on point with their blocks, you might want to try grabbing. Grabbing will put your opponent in a hold, and you’ll start this sort of “rock paper scissors” battle where counters and moves and strikes will all depends on how your opponent reacts to it. Usually, when you grab first, you’re in the advantageous position, so try tossing your opponent around to inflict some heavy damage.

Strikes and grabs can be modified by running. Running is achieved by double tapping any direction quickly. Running attacks deal significantly more damage than regular attacks, but beware! Whiffing a running attack will leave your character wide open to counter attacks. If you’re feeling gutsy or if your opponent just whiffed a big attack, try a running attack!

So, if you happened to find yourself on the unfortunate receiving end of a grab, you have several options. The G button turns into the Counter button, and the B button turns into the Escape button. Countering a grab will reverse the grab and put YOU in the advantageous position, while your opponent is now at your mercy. Escaping the grab is exactly what it sounds like – you get out of the grab altogether. The tricky thing is, in order for either option to work, you must press the right button at the right time. If your opponent is going for a Transitional move, you have to hit G. For Move, you have to hit B. There is a lot of luck involved in this, so we found out that the best strategy to escape grabs is to just randomly hit all directions and B+G. Eventually you should be able to escape and counter attack.

Hitting S plus any other button at the same time will result in your character throwing out a special attack. These attacks are much like the running attacks; they do heavy damage but have long wind-up times and leave your character open to counter attacks at the end. If you manage to land them though, they’re very much worth it. High risk, high reward!

That’s all for Weekend Warriors MMA. If you have any other tips or tricks to share, leave a comment below!