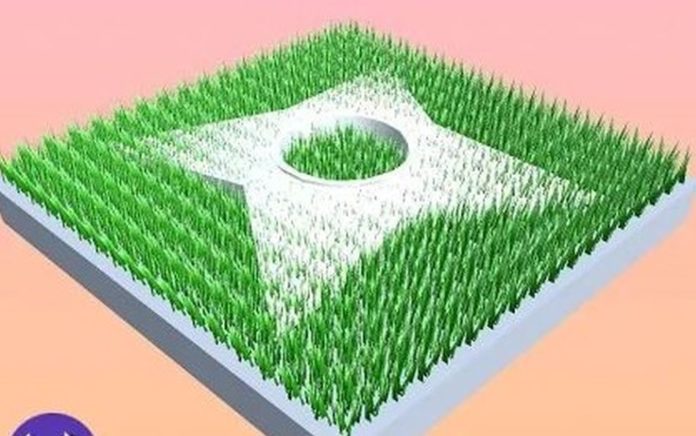 These Weeder Match tips and cheats we are going to share with you in today’s article will help you unlock all weapons quickly and level up faster than you can say “grass”. If you wanted a chill and relaxing game, then we’re pretty sure this is the one for you!

In this Weeder Match guide we will walk you step by step through the game, from unlocking all the possible weapons, to all the possible upgrades you can make to the weapons, and also reveal a few techniques that we have found work really well for chopping down that grass.

So, without further ado, let’s dive right into the Weeder Match tips and tricks!

Tap or hold, your choice 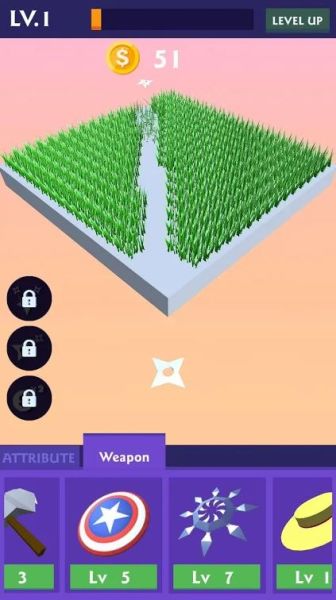 By holding your finger and dragging it across the screen a new weapon will launch every few seconds (or multiple times per second, depending on the upgrades, but we’ll get into that down below). This is way easier to do, and also way more satisfying than the tap method.

This game also has a third way of being played, and that is by NOT playing. If you simply want to let it play on its own, the game will do just that if you don’t touch the screen. Depending on the Speed and Takt Time upgrades, it will send out a new weapon every few seconds to chop the grass on its own.

This is a great way of “playing” the game when you can’t really play because of reasons, so you can just let it run on its own. The game will automatically shoot out the weapons to chop all the grass on the screen, and aim it well also! You will however have to tap on the boxes once they appear on the screen, else it will not progress.

There are 4 types of upgrades you can make:

– Takt Time: This upgrade is the one that basically lets you “afk” during the game. It will send a new weapon every few seconds on its own to chop the grass (as mentioned above) and every new upgrade you make will reduce the time it takes to launch a new weapon. 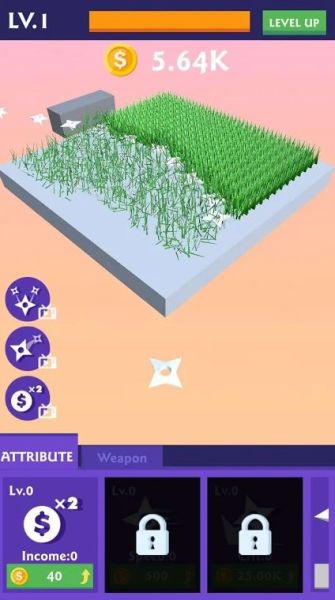 – Value: This upgrade boosts the value of the grass you cut. It’s great to upgrade this if you want to make other upgrades quicker, because even if you invest in this, it’s called “investment” for a reason. So the more you upgrade this, the higher faster you will get your money back and be able to use it on the other upgrades.

– Speed: The Speed upgrade is just the speed at which those weapons go through the grass. It’s best used if you decide to play the game yourself instead of letting it do its thing, because the Speed will let you shoot out more weapons quicker (especially if you choose to tap and hold).

– Crit: This upgrade will basically let you do more damage to the grass. The hits don’t always crit, but when they do, you will notice a big difference (more damage obviously).

There are several ways you can do your upgrades, and of course, you can upgrade them at your own free will, but in my opinion there are two main ways you can do them depending on your style.

If you choose to play passively (or letting the game play on its own) I suggest upgrading the Value up to level 10-15, and then focusing everything on the Takt Time. This will let you shoot out new weapons more often and also grab quite a lot of money as well.

If you choose to play actively (or actually being in the game, sending the weapons yourself) I suggest upgrading the Value again up to level 10-15, and then putting 10 points into Speed, and then start leveling up Crit. After you get about 10 levels in Crit, you should focus again on the Speed, and when you feel like it’s going too slow, start adding points to Value again.

Of course, all the upgrades are important, so don’t neglect any! And if you feel like you would like a mix of all the four of them, go right ahead and level them all up together! 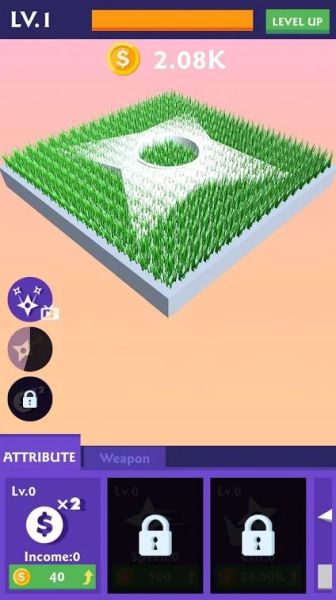 Grab all the weapons!

The weapon you choose doesn’t really matter in terms of clear speed, so they are purely aesthetic. Some of the weapons you will unlock by simply playing the levels (level 4, 6, 8, 12). Other weapons will only be available to unlock by watching an advertisement or two.

I suggest watching them if you got your eyes on a certain weapon, because the simple Shuriken weapon isn’t all that exciting to be honest. Once you unlock the weapons, you can use them at any time in the game and swap them out between them at your own will, so it’s not a waste watching an ad to unlock them!

There are 3 boosts in the game that will let you either have a godlike clear speed of the grass, or grant you a lot of gold.

– The laser boost: As the name suggests, this will send out a laser. The laser will clear all the grass at once, in a few seconds. It’s good for clearing about 3-4 stages quickly at once.

– The money boost: This boost will let you collect more coins when you shoot out the weapons, so if you feel like you need that extra money, go ahead and use this boost! It’s going to double the money you make.

If you want to see our best techniques for clearing the levels, you can check out the gameplay video below! It’s great if you want to have a look at some of the weapons also, because we have unlocked quite a few!

These would be all the Weeder Match tips and tricks we have for you right now! If you know some other cool and helpful tips, leave them down in the comments below to be shared with all the other players!