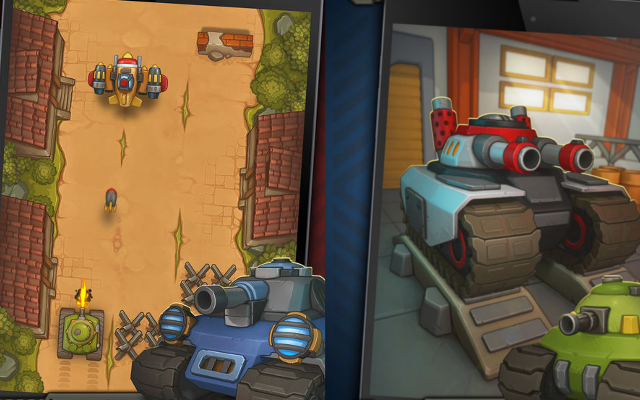 It’s time to learn the Way of Tanks! Way of Tank is an endless runner with an explosive twist. See how far you can take you tank, and be ready to blast anything that gets in your way! Jump, maneuver, and shoot your way to victory to complete the with the world. How far can you get? With the help of our Way of Tanks cheats and tips, hopefully far!

It’s time to join the tanks army and go the distance, so let’s get started with our Way of Tanks cheats, tips and tricks strategy guide!

Your tank’s ammo isn’t infinite, and you’ll need to cough up your hard-earned coins to buy more ammo. You can also find ammo randomly on the tracks, but they’re pretty rare. Try to conserve your ammo the best you can, and only save it for emergencies. If you can swerve around a wall for example, do that instead of shooting it down.

There aren’t any instances where you absolutely need ammo, but it’s still good to have in case you get swarmed by those random rushing jeeps. Be sure to watch for the ammo pick ups. Also, try to always grab the blue ammo power up. This temporarily doubles your attack power, but it also grants you one ammunition.

Upgrade the coin power up!

Of the four temporary power ups you can upgrade in the shop, we recommend upgrading the coin multiplayer power up first. This power up doubles the value of coins, so it can really help with massing enough coins to get the other upgrades. Of course, this is also dependent on whether or not you’re lucky enough to run into one of these power ups out on the field.

Grab all the power ups!

Some power ups are more useful than the others, so it’s up to you which ones you go for. More often than not the game will spawn them in alongside coins, so you’re going to have to make a decision!

Save up for the big tanks!

There are three additional tanks you can unlock, but they cost astronomical amounts of coin.

It’s ultimately up to you what you want to work towards first. Do you go for extending the length of the temporary power ups? Or do you save up for the tanks that essentially have these power ups built into them? We recommend at least getting one upgrade for the coin multiplier power up first, as that really helps with getting coins.

That’s all for Way of Tanks. If you have any other tips or tricks to share, let us know in the comments below!