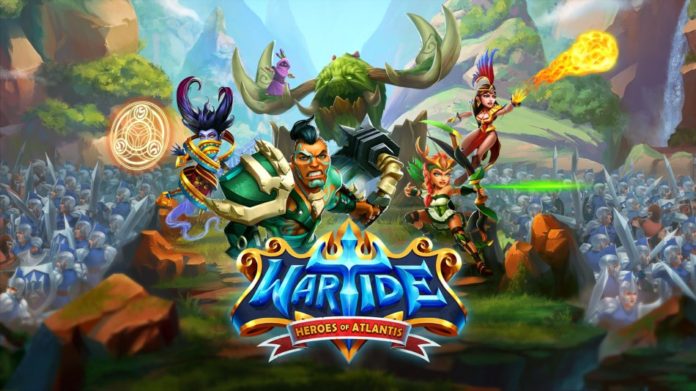 Kongregate challenges us to rebuild Atlantis in Wartide: Heroes of Atlantis, a beautiful RPG for mobile that includes recruiting and training awesome heroes and strategizing a lot in order to win difficult battles against various enemies. Things seem easy at first, especially since the game’s mechanics have been seen before in similar games, but it’s still not easy to rule the world and become the best. In order to help you get as close as possible, though, we’re here to share some Wartide: Heroes of Atlantis cheats and tips in a complete strategy guide for beginners and more advanced players alike.

So if you’re struggling to get that three star rating, or you just want to improve your team and your game, it’s time to put the game aside for a little while and check out some Wartide tips and tricks below.

Complete missions
Once you unlock them in the Quest menu, working on as many missions as possible will help you progress faster. Heroes sent into missions can still be used in battle, so make sure that you fill up as many missions as your heroes allow you to and constantly collect and restart them. Also check them all out before sending heroes to a mission because some heroes will give you boosts if sent in particular missions.

Always have Guardians assigned
A similar thing goes with Guardians in your alliance: you can assign up to two heroes who will act as guardians, and they will generate Alliance tokens/shields as they spend more and more time there. Even more, if your alliance members pick up your heroes as their Guardian in a battle, you’ll earn 10% of the loot. With the alliance shields, you can buy various goodies from the Alliance shop, so it’s always a good idea to have as many as possible.

Keep your Heroes in tip top shape
There are three important things to keep an eye on when it comes to your Heroes: their Rank, their Abilities and the Runes they have equipped. We’ll talk about each in more detail below:

Abilities
First of all, you should do your best to keep their Abilities at the maximum level at all times. That’s expensive and it will take a while, so start with your best/most favorite hero and work your way down to the least favorite. I recommend upgrading them all to at least half their maximum level first, then work up with the upgrades until you max them out.

All players get the same 5 starting heroes no matter what, and I would recommend leaving the Archer (Demetra) behind as she is the weakest hero in the squad. I recommend focusing on maxing out the rare hero first, the healer and the fighter in that order.

As you play more, you will unlock new and better heroes which will replace the worst in your team. This is why it’s better to try and work on them one at a time, from the best to the worst – if you unlock a better hero in the mean time, you wouldn’t have wasted precious resources on upgrades.

Runes
You collect Runes randomly as you win various battles and they work in a similar way to abilities: they grant all sorts of bonuses and can be upgraded. I also recommend upgrading them a lot, especially since they use a different kind of resource (Gold). The good thing about runes is that you can equip and unequip them as you see fit, so you can’t go wrong with them in the long run: there’s a ton of rune slots available so all upgrades are welcome.

Rank
The rank of your heroes is extremely important: the higher their rank, the better their stats. The good thing about the items required for ranking up your characters is that you can simply tap them in the menu and then hit the “get” button: the game will automatically take you to a mission that can drop them for you. Either go for the raid tokens or go through the battles manually, and you will eventually get them all.

It’s a good idea to wait until you have all the required items before assigning them to a hero: once you assign an item required for promotion, you can’t remove it and use it for another hero if needed and they don’t increase their skill anyway

Winning your battles
Of course, the most important part in the game is guiding your heroes to winning as many battles as possible and mastering them in order to progress. Before we get to tips and strategies on how to win each battle, it’s worth having in mind that, for the campaign, it’s not really a bad thing not to master a battle: one or two star fights can be replayed (and more loot/xp gained), while those that have already been mastered can’t. You can replay boss battles, but it’s not the end of the world if you don’t master all fights as soon as you unlock them.

With these in mind, here are some tips and strategies for improving your chances in battle:

– know what your heroes’ abilities do and what they’re strong at/against. Using an ability at the wrong time in battle can prove to be very costly.
– flanking is extremely important, so make sure that you always do it if possible. Don’t let weak troops exposed just to flank as it is not worth it, but if you can do it safely, go for it. Remember that if you flank an enemy and they flank you too, all flanking bonuses are cancelled.
– keep the weak/ranged units at the back: this is pretty much common sense I guess: there are few occasions in which you should send your ranged units to the front line.
– don’t rush to bring in Guardians from your alliance: they can indeed prove to be extremely helpful in difficult battles, but it’s still beter to fight with your own heroes IF they are not at the maximum level as the XP they gain from battle is more useful for the long run. If you have your heroes maxed and still can’t do a good job, recruit solid guardians for your team, but remember that 10% of your loot goes their way
– always have a strategy for the battle: even though you can’t control the movement of your troops after launching the attack, you should know how the battle would go for the most part. Anticipate the moves on the battlefield and set up your formation in such a way that the biggest threat is taken care of first and you don’t leave any flanking options for your enemy in the long run.
– the healer is extremely important: be patient and wait for the mana levels to fill until they can use their healing power. Without a healer, most battles are easily lost.

Keep an eye for special battles
There are various special battles that you unlock on the campaign map, available from the Realm of Legends building in the City, as well as various Challenges that reward you with amazing loot. Keep an eye out for all these great challenges and special missions and complete them as often as possible, trying to get the most out of the while you can. These missions are extremely important as they give you rewards that you would otherwise have to pay a lot for!

These are, for now, our Wartide: Heroes of Atlantis tips and tricks. If you have additional strategies to share with fellow players, please do so in the comment section below.