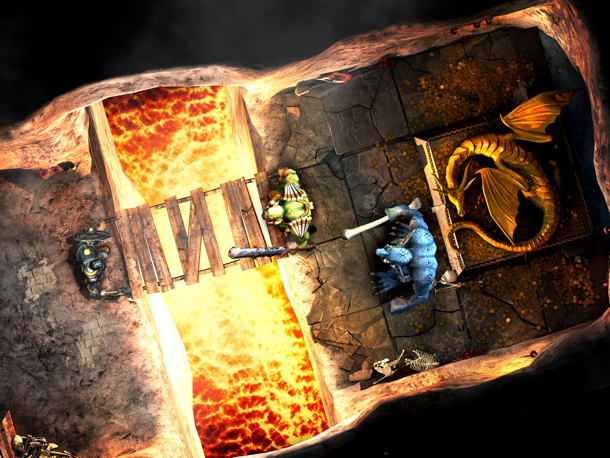 Popular iOS tactical fantasy game Warhammer Quest, developed by Rodeo Games, has received its new expansion titled “Brutal Tribe” which, as the name suggests, will test players’ skills against a whole new series of tough battles and encounters. The expansion was originally announced back in August and is now available for purchase.

The Brutal Tribe expansion sends players and their armies into the dreaded fire caverns map where they must survive encounters with a variety of new foes including Stone Trolls, Savage Orcs, and Black Orcs. Fortunatly, Brutal Tribe also adds in three new hero classes which can be purchased and used against these new foes.

The Shadow Warrior, Bright Wizard, and Ogre Irongut can be purchased individually or as a complete pack and each brings with them valuable new skills and attacks which can be used against the denizens of the fire caverns. Several new legendary weapons can also be purchased and equipped to help turn the tides of battle in the player’s favor. The Brutal Tribe expansion also adds in a bevy of new standard items, armor, and weapons and also raises the game’s level cap up to eight.

For those who want to pick and choose which pieces of content they are most interested in getting, Rodeo Games has made it easy. The Brutal Tribe expansion by itself (which includes the new standard items, fire caverns map, new enemies, and level cap increase) costs $4.99. Each of the three new heroes can be had for $2.99 a piece, and the new legendary weapons will set you back at $.99 a pop. Players who want to purchase everything the expansion offers should be ready to shell out about $18.91 plus tax.

While a just-under-twenty bucks price tag may seem a bit steep for an expansion to a mobile game, when you consider that most expansions for standard board game cost anywhere between $20 and $40, Brutal Tribe’s asking price doesn’t seem quite as steep.