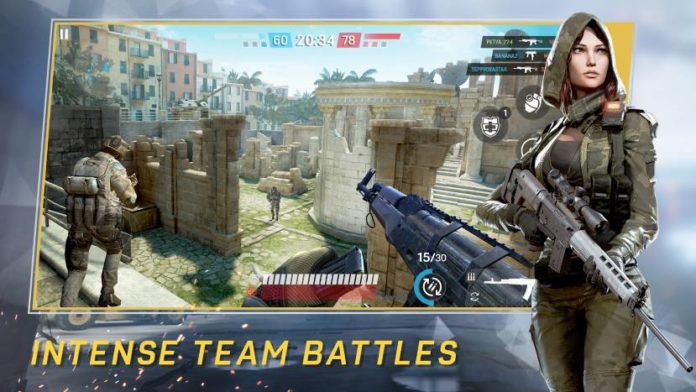 Welcome to the global front, soldier! Warface: Global Operations is a team-based competitive first-person shooter. Step into the shoes of a soldier and take on the world in fast-paced firefights against people all over the globe.

Your minimap has a lot of info!

When you are running through the maps, it helps to glance over at your minimap every so often. It may not seem like it at first, but it actually contains a lot of info that can communicate helpful strategies to you.

First of all, your minimap has several quadrants to it that are relative to your current direction. If a nearby enemy fires a weapon, their relative location will flash red on your minimap to tell you the direction they are in.

Secondly, your teammates’ locations are always on the minimap at all times. If a teammates has died recently, a blue X will show up at their last known location before they bit the dust.

Combining all of this info and you should be able to get a good clue onto where your enemies are lying in wait. Remember though that if the enemies don’t fire their weapons, they will not appear at all, so stay on your toes!

Complete the quests for goodies!

On the main menu of Warface, there an option to view your current quests. Quests are split into two groups: daily and weekly quests. The daily quests require you to deal a certain amount of damage using specific guns, which are not hard to complete.

The daily quets rewards you with keys, consumable items like knives, grenades, and armor packs, and a few gems. The real rewards lie within the weekly quests. As the name implies, these quests do not reset until the week is over, which naturally means that they will take much longer to complete.

However, if you do take the time to complete them, weekly quests offer substantial rewards, including 5 keys, 10,000 cash, and 75 gems with more if you have the season pass.

The War Boxes are the only way to get the strongest weapons in the game, so you need to work on these quests to get the keys you need!

Choose the right gun for the job!

There are four main weapon classes in Warface: assault rifles, shotguns, sniper rifles, and submachine guns. You can bring any two with you into a match, but since you have two loadouts that you can switch between deaths, you can effectively have all four with you.

Shotguns are destructive forces when you within close quarters of your enemies. It goes without saying, but the smaller the gap between you and your opponent, the better shotguns perform. Shotguns shine on maps with a lot of tight corridors and small rooms, but lose to just about any other gun when your opponents can get some distance on you.

On the flip side, sniper rifles can be extremely powerful when you are left alone. On maps with wide open spaces and not a lot of cover, you can pick off players from afar before they even knew what hit them. If you have good aiming, we recommend turning off autofire, as this will let you fine tune your aim and go for headshots. Sniper rifles are very map dependent and they require a lot of skill, but in the right hands a good sniper can shut down an entire team!

Last but not least, we have the submachine guns. These things pack a punch with their extremely high rate of fire. If you catch an enemy off guard and unload a full clip, they will probably drop dead. However, submachine guns have low stability, meaning that accuracy can be an issue at any range greater than short distances. Also, their clip sizes are relatively small so if your enemy does not die on your first clip, you might be in trouble.

Remember that you have two loadouts, so we recommend using all four weapons so that you can adapt to the situation at hand.

Do not forget your side gear!

You will always have access to a knife and a handgun. Your character will automatically start firing with their handgun if they run out of ammo for their currently equipped primary weapon. Your knife is available whenever an enemy is close enough, and a knife button will appear on the side of the screen. Knives will instantly kill enemies!

You cannot upgrade your handgun like you can with primary weapons, but you can unlock new handguns that have different stats. Choose the one that is right for you!

In addition to this, you also have two gear slots where you can bring helpful consumable items into battle, like grenades, armor kits, and throwing knives. You only have two slots, so you must choose wisely.

You start the game out with armor kits and grenades, both of which are very helpful. Grenades can flush out hiding enemies or take out grouped up squads, and armor kits can help you stay alive for much longer.

Throwing knives are a little tricky to work with, but they can be deadly in the right hands. Just like your regular knife, throwing knives instantly kill upon contact, so if you have good aim you can wipe out multiple enemies in a row.

For us, we like to always have armor kits on hand. Your health regenerates on its own if you can stay out of combat for a few seconds, but armor never regenerates unless you use a kit. You can only sustain a few hits without armor, so going without armor kits is basically giving up a second health bar.

Weapon upgrades start off simple, but then the trees branch out to offer multiple upgrade options. Eventually you want to unlock every single thing on the upgrade tree to push the weapon to its full power, but you can prioritize which ones are more important to you, like scopes.

Armor upgrades are even more straightforward as you cannot upgrade each individual armor piece alone; you will unlock new armors as you level up and they offer better power and protection. Some pieces even have special abilities on them that affect your skills, like the Crusher set increasing the amount of consumables you can take with you into battle. Check these skills before making a purchase!

Team Deathmatch is the most common mode you will come across, and this is simply a race to see which team can get the most kills first. Every kill is tallied up, and the first team to reach a certain score wins.

In this mode, teamplay is the key to survival. Do not run off on your own and try to take on their entire team by yourself – that is a quick way to get yourself killed. Instead, stick together and watch each other’s backs and take on enemies together. Your odds of survival are much higher when you have a teammate nearby.

Control is the other mode you will be playing a lot. In control, there are three zones marked on the map A, B, and C. You have to stand still in the zone for several seconds to capture it. When a team has a zone captured, their score will slowly go up. The more zones captured, the more points they will receive.

This mode is a little more difficult because you need to split your team and balance between offense and defense. Running from point to point capturing them as you go, but can be dangerous depending on what the enemies decide to do. Remember that the zones matter more, so capture before you go for kills.

That’s all for Warface: Global Operations! If you have any other tips or tricks to share, let us know in the comments below!