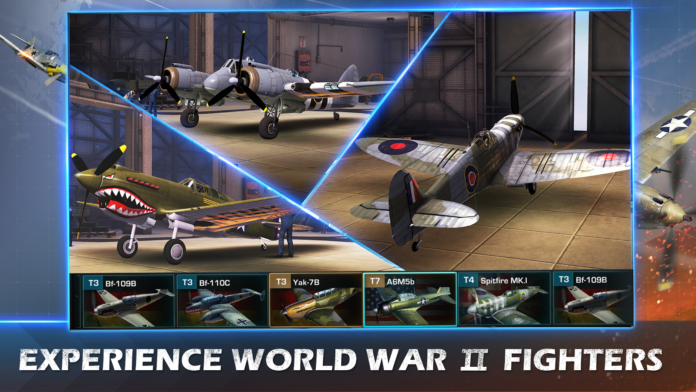 War Wings puts you in the cockpit of a World War II fighter in the middle of epic dogfights! Fly solo or in a team to fight against players from all over the world to see who is the ace pilot! Our War Wings cheats and tips will lead you to victory in the skies and become the number one ace pilot.

Your mission is about to begin, so let’s get started with our War Wings cheats, tips and tricks strategy guide!

Utilize Jaeger and your minimap often!

One of the beginning challenges will teach you how to take advantage of your Jaeger and Godview options. If you’re ever unsure of where your opponents are, tap on the radar to enter Godview, a top-down perspective that shows you a bird’s eye view of the map. Detected enemy targets will show up on the radar, and tapping on them will select them. Activating Jaeger at this point (the lock-on button on the left side of the screen) will turn your camera to lock-on to the ship.

This is useful for planning your course of attack and keeping track of your enemies. During the auto turn around, you can also use your throttle or brakes to control your turning speed. Utilize these tools often – they’re very handy!

Fine tune your aiming while locked on!

Once you start firing upon a target, your camera will automatically engage Jaeger and lock on, indicated by the ring around your peripheral view. In this mode, a little orange box will appear over your target – this is the lead box. Try to align your crosshairs with the orange box as this is the spot that will make all of your shots land according to the direction and speed your target is moving in. Lining up right with the box will inflict tons of damage!

In addition, moving the virtual joystick in any direction will fine tune your aim. Your crosshair will move with lower sensitivity allowing you to target specific parts of the target plane. Damaging certain parts can inflict status ailments that can really hinder your enemy.

If your targets are really slippery, sometimes it might be best to just focus on disabling their planes.

Work together with your team!

Teamwork is absolutely vital to victory! At the start of a round, don’t immediately boost away from your teammates – that’s just asking to get shot down quickly! Always stick with your team and try to have at least one plane covering you. Use voice shout outs to designate who to target first. Multiple planes working together to take down one enemy is probably the most efficient and safe thing you can do.

Use the aileron roll for evasive maneuvers!

Swiping left or right will make your plane perform an aileron roll, most commonly confused with barrel rolls. This evasive maneuver will have your plane roll in the direction you swipe in. Depending on your plane’s speed and flexibility, it may not help that much with machine gun fire, but it can help with bombs and missiles.

Swiping up will make your plane perform an upward somersault, which turns it towards the opposite direction of where you initially started the maneuver. Swiping down will perform the same thing except your plane will dip down. Be very careful when using these maneuvers as you do them pretty slow – mistiming them can easily get you killed. If you have a bogey on your tail that is VERY close to you, you might be able to shake them with an aileron roll. If they’ve got some distance on you, it might be better just to try to lose them manually.

That’s all for War Wings! If you’ve got any other dog fighting tips or tricks to share, let us know in the comments below! 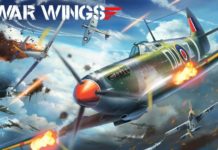 War Wings Guide: How to Get More Planes