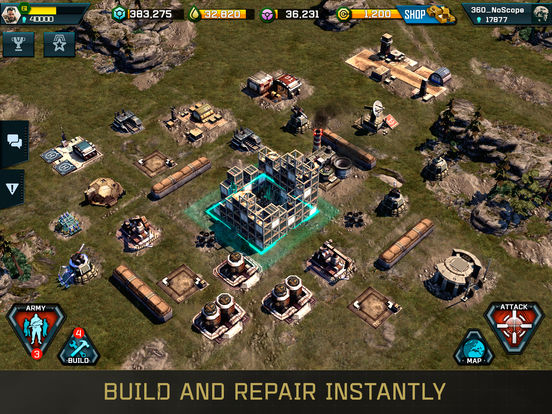 It’s military strategy action like you’ve never seen it before! War Commander: Rogue Assault takes what you know and love about the genre and adds plenty more action into the mix. Assault other players’ bases with a massive army of tanks, jets, and more, plus you’re in full control the entire time! Use strategy and tactics to outwith your opponent’s defenses and gain the upper hand. Swipe and destroy with the help of our War Commander: Rogue Assault cheats, tips and tricks strategy guide!

Since War Commander allows you to order your troops around without any kind of limit on resources, you should try to micromanage them as much as possible. Proper and careful micromanagement of your troops will ensure that casualties are minimal. For example, say you’re going up against a nest of machine gun turrets. If you use the select all command and send your entire squad, chances are your infantry or faster vehicles are going to reach the turrets first. If they do they’ll get shred to pieces really fast! Instead, if you have a heavy armor like a tank in your squad, send that in first to get the turret’s attention. Then you can move in with the rest of your squad to take them out.

This might not apply to PvP matches, but often times during the campaign you’ll be met with a heavily fortified wall. Always be aware of your environment and check for side paths or back ways that will allow you to ambush and flank the enemy. Always try to avoid charging the enemy base head on, as that will take down even the most fortified squad.

Sorry, but you can’t get through the game without taking out some competition! In addition to the usual metal and oil you get from taking out player bases, PvP also offers exclusive supply boxes as rewards. These supply boxes contain materials you need to promote and equip your units. Campaign doesn’t seem to offer these boxes are rewards, so you’re going to have to get your hands dirty!

4. Choose the right units for the job!

Each type of unit is strong and weak against other units. If you go into the War Factory, you can take a closer look at each unit type. Units under the “strong against” box are color coded: green means strong against, yellow means neutral, and red means ineffective. For example, PK recon trucks are great against infantry squads but cannot make a dent in tanks or other heavy armors. Before you take on an enemy base, scout out the area and see what units they have lying in wait.

Any time you successfully raid a player or campaign base, you’ll earn a good amount of oil and metal. Watch your caps and make sure none of those resources go to waste. If you beat a level and have no space, the resources will disappear. At the beginning of the game you’ll start out with way more oil than you can hold, meaning your oil generators won’t provide anything for you. This shouldn’t be a problem though as you’ll be spending oil after practically every fight. Be sure to spend before you head into battle!

That’s all for War Commander: Rogue Assault. If you have any other tips or tricks to share, let us know in the comments below!