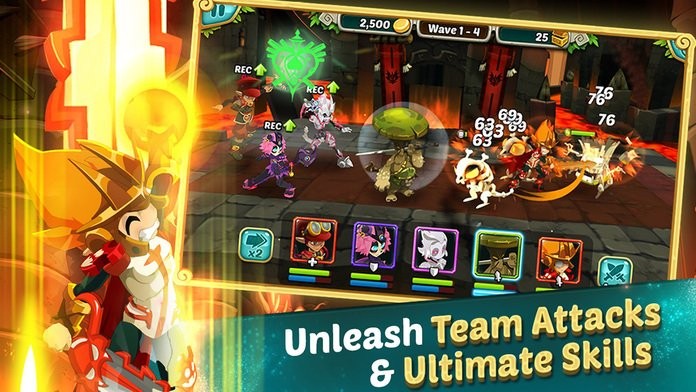 Gumi has just launch a pretty addictive RPG titled Wakfu Raiders, a title where you battle to build a flawless squad and defeat zany enemies like the Wabbits shooting carrots your way and strange birds the reduce your attack rate. Fun and simple in concept, Wakfu Raiders is difficult to master and I am here to help you with some Wakfu Raiders cheats and tips: a complete strategy guide to ace all stages and build the ultimate heroes that you know you want. And need.

So let’s not waste any time, there’s a lot of glory waiting to be earned – check out below our Wakfu Raiders tips and strategy guide!

1. Learn the special attacks and know when to use each of them. When fighting in any type of mission, you can tap the I button in the upper right corner and see the attacks. There are 4 types available, and we’ll talk about each of them below:

I personally prefer to start usually with a Defense Buff and keep repeating it as often as possible: it works really well so far, and I focus on my front heroes because this also increases their special attack rate gains which gives you a solid advantage in battle. So to be honest, I still haven’t reached the moment where I have to actually use anything else than the Defense Buff attack, so I highly recommend it too.

2. Elements matter in Wakfu Raiders, meaning that some types of heroes are better against specific enemies than others. You can also see how this rock-paper-scissors formula works in the game by tapping the I button in the upper right corner. Basically, in the later stages, there will be moments when your team setup could influence the outcome of battle, so always remember that you have this option and if all else fails, work on the heroes you bring into battle and take advantage of the element bonuses.

3. Placement of your heroes in battle matters too: the one on the front line will attack first (and be the first ones to be attacked), while the ones in the back are the last to attack. So have this in mind when setting up your team and make sure that you have the heroes with the biggest health and the ones you plan to use the most up front.

4. Don’t forget to use the special attacks of your heroes, as soon as they are unlocked. On rare occasions, it is wiser to wait before using the attack (for example, if it unlocks right before the Boss battle in the final stage), but usually it’s best to activate them as soon as possible. Know what each character in your team does so that you can activate them in the best possible order: area attacks first, then single target attacks, for example.

5. Focus on completing the daily missions to get some quick coins that are useful for purchasing new stuff from the Portal or upgrading your Heroes. This is by far the easiest way to earn a lot of coins every day.

6. Enhance your heroes as soon and as often as possible. They all require a ton of different types of materials, but the good thing is that you can tap each required material and the game will tell you in which mission you can get them from. See if there are any dungeons that might reward you more types of needed materials for enhancement and grind those missions until you get them all. It will take some time, but you are guaranteed to get the required items, eventually. I would recommend playing the easiest dungeons because they require less energy and you go faster through them.

7. Level up new heroes using the potions, but don’t waste them on your veteran heroes. The veteran heroes are with you since the start of the game and they’re naturally gaining experience while you go through the missions, while the new ones can use the boost. So save the potions for when you get new heroes to quickly get them in shape for battle.

8. Play often in the Arena too: choose players that you are more likely to defeat. These are the players that give you the lowest amount of AP, but 30 is better than zero, and usually the more AP an enemy gives you, the more difficult it will be for you to defeat them. Remember that the better your ranking in the Arena, the better your daily rewards, so it’s worth paying a bit of extra attention when choosing your opponents, playing it smart and winning!

9. Log in daily even if you don’t get the chance to play: you will still get the bonuses and the more days you log in during a month, the better your rewards.

10. Don’t forget to level up the skills of your Heroes! As they level up, they unlock more and more skills which can be leveled up individually. These improve your stats greatly, so make sure that you always max them out!

These would be, right now, our tips and tricks for Wakfu Raiders – if you have other strategy advice to share with us, let us know by commenting below!