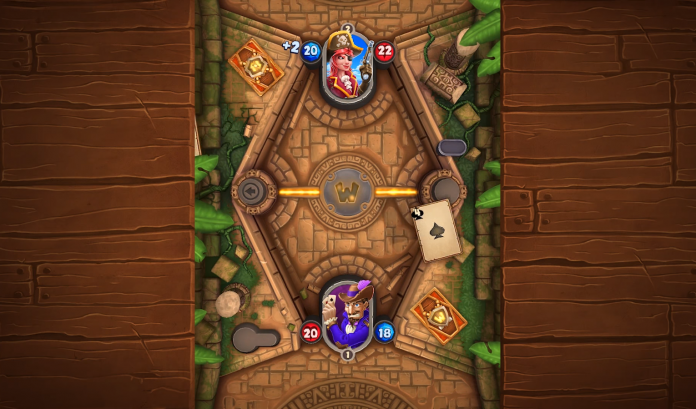 Wagers of War is a new card battling game based on the classic game War. Take War’s rules, throw in a fantasy CCG twist, and you’ve got Wagers of War! With the help of our Wagers of War cheats and tips, you’ll be able to think on the fly and make snap decisions as the battlefield’s strategies unfold before your very eyes.

Featuring the complexity and depth of games like Hearthstone while keeping things accessible, Wagers of War is a game that you’ll keep you around. So, let’s start mastering it with our Wagers of War cheats, tips and tricks strategy guide!

You’ll earn a free card pack to open every couple of hours or so. Check back often to make sure you start opening! That’s not all though – be sure to check out the card shop. The card shop will always have two or three cards for sale, and it takes about ten hours for the stock to change. Every now and then when the stock changes, you’ll be able to get a card for free. This is really helpful when you’re trying to upgrade specific cards, so don’t miss out.

Each Hero has their own stats and unique ability that you need to know beforehand to be prepared. Your starting hero, the Iron Knight, automatically gains 2 armor if your opponent plays a black suited card during war. With this knowledge in hand, you can perhaps play a little more offensively if you see your opponent’s hand full of black suite cards.

This is just one of many examples of knowing how to play around your Hero’s ability, so study up before deciding on one! Each Hero is suited for different playstyles, so play around until you settle on a favorite. Don’t forget to look at their base stats as well. For example, the Psychic has 1 less starting health than the Iron Knight, but has an impressive mana cap of 27 and starts the match with 10 mana. This isn’t even mentioning the Psychic’s special ability which lets him start the match with 7 redraws!

The face cards have special effects on them that amplify the power of your regular suite cards. Knowing when to play these cards can be a real detriment to whatever strategy your opponent is cooking up, so here’s a quick reference list of what each effect does.

Think about your opponent’s hand!

Before you commit to any kind of card decision, always take a quick glance at your opponent’s hand and think of the possible actions they can take during that turn.

Did they draw nothing but black suited cards? Maybe you safely pass that turn to conserve mana without the fear of an attack.

Did they draw a face card while you drew a big attack card? They may try to pull funny business on you, so time to think of a backup plan.

Those are just a few possible examples of mini strategies that are constantly going around. You’ll need to think on the fly to be able to counter your opponent correctly.

Remember that you have 30 seconds per turn, so while it’s not a lot of time, it’s enough time to devise up some new strategies.

That’s all for Wagers of War. If you have any other suited (red or black!) tips or tricks to share, let us know in the comments below!