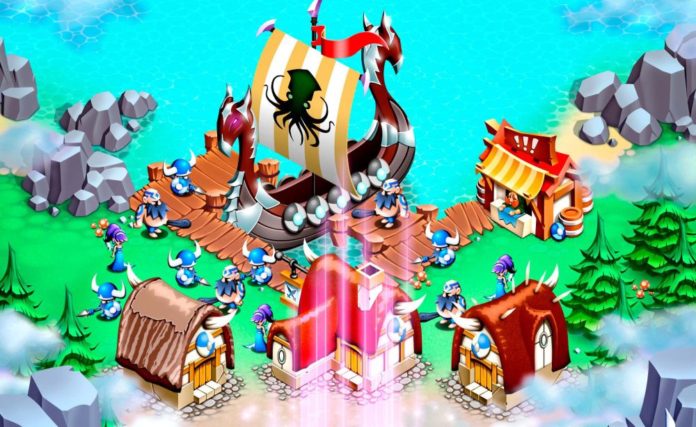 Viking: Heroes War is an epic idle game for mobile, with clicker game mechanics and a bit of RPG and strategy thrown into the mix. The result is an awesomely addictive and extremely good looking game, one that we’re going to get better at thanks to today’s Viking: Heroes War cheats and tips that we have to share.

With tons of heroes to unlock, difficult battles to win and countless items to loot, this game will definitely keep you busy for a long time – especially since it also has such amazing visuals, too!

But enough praising! Let’s move on to today’s topic and let’s check out below a bunch of Viking: Heroes War tips and tricks in our complete strategy guide!

Upgrade the passive earners to get the milestones
Troops cost a lot of money – and so do ship upgrades, so make sure that you level up the passive earners constantly. These upgrades also get more and more expensive as you go through the levels, but a good strategy is to check out their milestone rewards and level them up accordingly.

Each of these passive earners – the orb upgrades – unlock special bonuses when you reach a certain level – at level 10, 50, 150 and so on. This is why it’s a good idea to check out these bonuses and upgrade from top to bottom until you reach a specific milestone. They are extremely useful, as they give you all sorts of goodies, usually boosts during battles.

Only recruit Strong units for battle
There are three types of units you can recruit before a battle and each time one of them will be weak against the opponent, one will have no bonus and one will be strong. Make sure that you only get the strong units recruited in order to have an easier life during the battles.

Always go with the maximum number of units recruited since that makes everything a lot easier – but keep an eye on the indicator below as well. If somehow the meter goes to “Easy” before filling up the boat, I’d only recruit a dozen or so troops for good measure and I’d head to battle. No matter if you win or lose, all the troops are lost when the battle is over.

Tips on winning all the battles 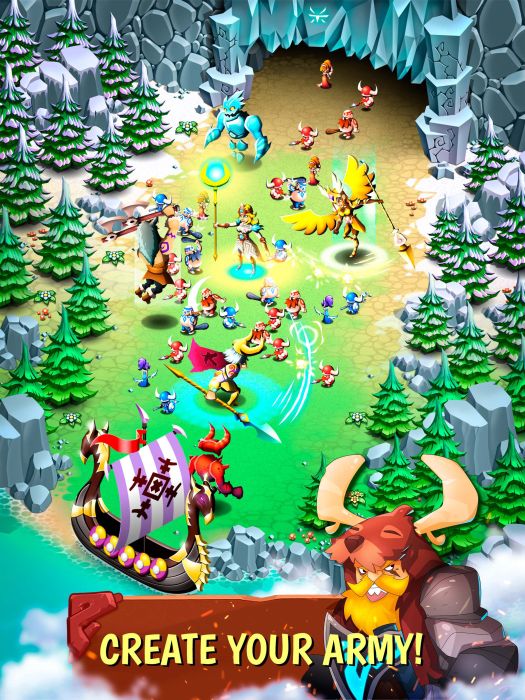 Winning battles in Viking: Heroes War is not very difficult as long as you have a strong set of troops recruited, use a bit of strategy and choose solid heroes to aid your cause. Here are some tips and tricks on winning all your battles easily:

– deploy the heroes starting with your strongest one (highers level / health), slowly followed by the second best and the weakest. This increases the chances of the latter to survive the battle or at least live longer.

– use spells at the right time. Usually, it’s best to cast the spell as soon as your hero is deployed, but sometimes it’s better to wait depending on what spells you have and what’s happening on the battlefield. Just have in mind that, most likely, you will only be able to cast one spell per battle, per hero. Make it count!

– I think that it’s vital to have at least 1 resurrecter in your squad, if not more for affinity bonuses. Cast the resurrection spell after a fair amount of soldiers is killed in order to actually get a lot of numbers in terms of extra troops.

– finally, make sure that your heroes are leveled up before going to battle and have a full set of health. You can also switch them as you please before battle – a good reason to have more than a set of three, especially if you’re really active.

How to get more heroes is Viking: Heroes War
Extra heroes are earned from treasure chests in most cases. You can watch video ads to get chests, but you also earn them when you win a battle, so eventually you will have a nice set of heroes to choose from.

Leveling up your heroes in the game
When you level up your heroes, their health and attack meters increase – but the progress is reset when you ascend. However, in order to be allowed to ascend a hero, certain requirements have to be met and one of them is having them to the maximum level.

Heroes are relatively scarce in the game if you’re not paying real money to play, so you should pay attention to the heroes you level up. My recommendation is to wait up to battle 12 before you decide what heroes are best to keep and which ones should be used as leveling up material. You will probably have a nice share of heroes by then and a better understanding on how they work.

Ideally, you should keep heroes that have some sort of an affinity bonus and use similar heroes to level them up since this way you get extra XP points (so you have to spend fewer heroes to reach maximum levels). My recommendation is to go with at least 1 resurrecter – if not two – and one or two damage dealing heroes, then have a maximum of two as backup in case your heroes die in battle and you don’t have apples to revive them, nor time to wait.

Get goodies from the merchant
The easiest way to make sure that you don’t run out of potions to heal your heroes, or apples to revive them is to visit the Merchant constantly. He always has a lot of goodies on offer and for most of them you only have to watch a video to collect. Make sure you visit often and collect those goodies!

Don’t forget to look for the bird
Every now and then, there will be birds flying above your base, carrying a chest in their claws. Tap them and you will receive some goodies, from various types of currency to potions and apples.

Keep on swiping for increased earnings
Finally, if you don’t want to just sit and wait for your funds to increase, you should do some swiping in a circular motion over the portal. This is the easiest way to do it over and over again and the good news is that the more you do it, the higher the multiplication bonus is. So the more you swipe, the more you make per swipe!

These would be, for now, our Viking: Heroes War tips and tricks. Do you have additional things to add to our strategy guide or maybe some questions to ask? Don’t shy away and let us know by sharing your comments below!