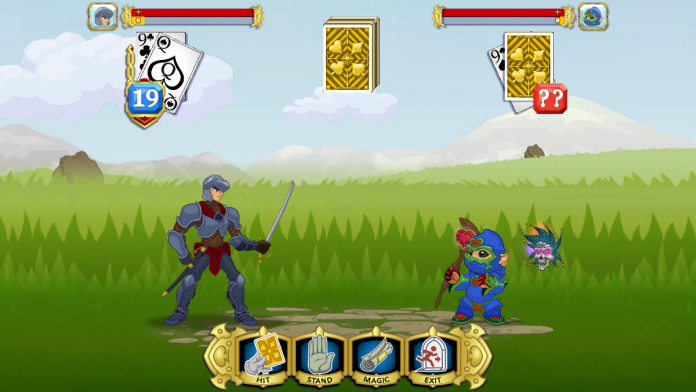 As the mobile market keeps growing, more and more companies are trying to tap into this huge market, developing some unique titles that try to stand out from the competition.

This is definitely the case for the first title developed by Sony Pictures Entertainment, an incredibly unique blend of role playing games and card games.

Suits and Swords is a quite light role playing game that incorporates rules of Blackjack in its battle system. Main character of the game is Captain Black Jack, who’s travelling all over the world to defeat the Joker.

Captain’s Black Jack journey will bring him to the the Heart Union, Diamond Empire, Club Kingdom, and Spade Nation, fighting monsters and other creatures.

As we already said, battles are basically a one versus one Blackjack game where each player will have to get as close to 21 as possible. The winning player will be able to attack the opponent.

Even though the game’s premise is incredibly simple, it’s terribly engaging. The light role playing game elements and the unique presentation make Suits and Swords a really interesting way to present what basically is a Blackjack game.

Suits and Swords is now available for free on the App Store. As other free to play games, this title comes with some in-app purchases that are in no way required to complete the game.