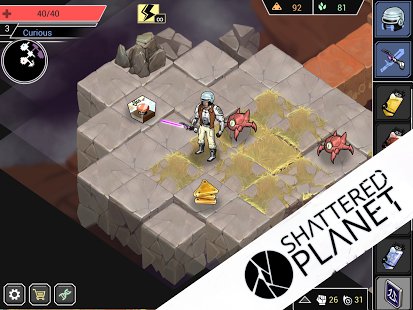 There seems to be no lack of good role playing games to play on the go lately, with many games getting released on the App Store almost weekly. With such a huge offer of games, each new title has to come with some unique features to truly stand out from the competition. Especially if they don’t have a big name behind them.

Shattered Planet is a role playing game that doesn’t really sport unique features, but those basic ones are quite well developed. The game is an isometric role playing game set in the future where clones roam the world. You will be controlling one of these clones as he explores a hostile world full of items to loot and enemies to defeat.

The game featured procedurally generated dungeons so expect to explore different planets everytime you land. While the game may end up being repetitive like many other loot based games, those who love collecting items will surely be engaged for a very long time.

As an added bonus, Shattered Planet is completely free so there’s no realm harm in trying the game as see if it manages to catch your attention for more than just a few minutes.

Shattered Planets is now available for download on the App Store.