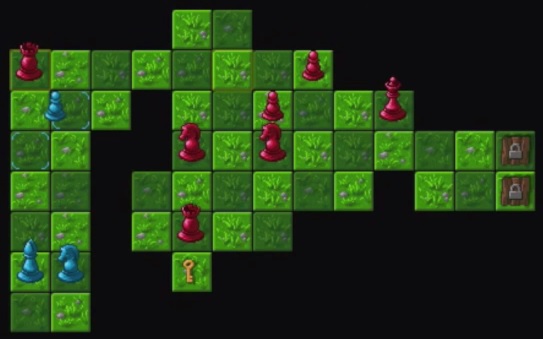 Roguelike games have seen a resurgence on the App Store, with a lot of interesting titles getting released for iOS devices offering unique spins of the basic gameplay formula of the genre.

Yet another unique roguelike game is going to be released soon on the App Store, featuring a gameplay experience that mixes dungeon crawling with chess.

In Chesslike, players will not see the usual characters of dungeon crawler games such as skeletons and other monsters but chess pieces. Players will have to control several different pieces during the game, with each piece coming with some movement limitation. Pawns will be among the enemies of the game and they will be able to move in any direction. With the game not featuring any procedurally generated dungeons, we can expect Chesslike’s levels to be cleverly designed around these unique gameplay mechanics.

Chesslike’s unique combination between chess and roguelike games may seems a bit weird at first, but it’s clear how the team knows what it’s doing. Unfortunately we still don’t know when we will be able to experience this unique title, as a release date hasn’t been confirmed. The game is going to be released “soon” and we will keep you updated on the matter so stay tuned for all the latest news.