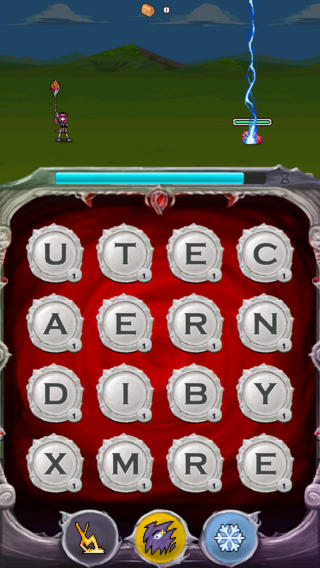 If you’re one of those gamers who love quirky and unusual game, you’ll be happy to know that another one of these unique games is now available for purchase on the App Store.

Word Mage is a really charming title that combines elements taken from role playing games, puzzle and word games. The titular mage will be traveling on the upper part of the screen and meet the occasional monster. Needless to say, the little mage will have to defeat the enemy in order to proceed.

Attacking the enemy is done through the lower part of the screen. Players will have to create words out of the letters available. By creating words repeatedly you will be able to defeat the monster and move on.

The role playing game elements come into play as soon as you complete a stage. You will have the chance to create some new powerful spells as well as level up your character by using the experience points earned.

Don’t think be confused, not even for a second, by the game’s cute looks. Word Mage is a game that will test your skills during later levels, as finding out words while under pressure is not going to be easy at all.

Word Mage is now available for purchase on the App Store, costing only $0.99. Take a look at the game if you’re searching for a puzzle/word game that’s more involving than usual.