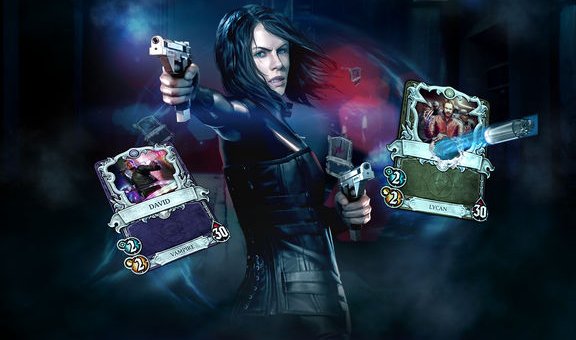 Out of nowhere, a CCG based on the Underworld franchise appeared on the App Store: Underworld: Blood Wars. Since I enjoyed the series, but especially CCGs, I decided to give the game a try. And even though it’s not perfect and seems rushed at times, it does have its moments and nice mechanics. But leading Vampires and Lycans into battle is not an easy thing, so I am here to help you get the most of it by sharing with you some Underworld: Blood Wars cheats and tips to build the perfect deck and keep on winning.

It won’t be easy – as you probably know already – and your strategy is what matters the most, but every little bit helps. So let’s not waste a single second and let’s check out below TTP’s Underworld: Blood Wars tips and cheats!

1. Get the most from your Champion
Or your hero, or whatever you want to call it/him/her. The idea is that each champion – and basically race – has strengths and weaknesses. Vampires, for example, are usually better at ranged attacks, while Lycans prefer close combat. So your Champion will follow these rules and you should do your best to take advantage of them: this includes the way you level them up and how you play them on the battlefield.

The most important thing is movement on the board. I personally believe that Vampires are easier to play because ranged attacks are usually a little easier to pull than close combat and less movement is required. Since you can’t normally move and attack in the same turn with your Champion, you should strategize in such a way that you move him or her as little as possible and keep dealing damage. Keeping your Vampire Champion on the starting line, for example, allows you to deal deadly blows without being close to the enemy and taking massive melee damage. Rushing with your Werewolf Champion forward, on the other hand, might seem suicidal at first but will prove to be a good tactic because he’s exposed if kept at the back. Know the strengths of your Champions and rush to use them – it’s very difficult to win otherwise.

2. How to level up your Champion
Usually, the options that give you extra damage are the best for each type of Champion, but always know the situation on the board because sometimes dealing a few bits of extra damage or even moving a character one lane backwards might give you the win. In other words, go for the extra damage only when that’s indeed the best option (and it usually is).

3. Complete the missions
Try to complete the three missions in any give 12 hours period in order to unlock the mega bonus (and score some extra coins on the way). Unfortunately, you can’t refresh missions and some are really difficult, but you have yo keep on trying because you can use that epic reward you get from completing all three of them.

A cheat – or better said, exploit – to easily complete some missions would be to start losing a bunch of games in a row in order to drop your ranks to the bottom (20) and start working back up from there. This works better if you already have some experience playing the game and a solid deck. But once you do, use this and you will quickly complete missions!

4. How to build a perfect deck
Well, you need cards in order to build that perfect deck and there are not many easy ways for you to get more cards. Make sure to collect the Free Card pack each time it is available for collection and always work on opening packs you unlock from playing games. Never rush the timer, because you should always pile up on the coins and buy card packs from the store. I would suggest not to wait for the Epic pack when you first start playing and get the Rare one as soon as you have the money – then wait for getting enough coins and buying the Epic pack. You can win extra coins for the packs by watching video ads – simply scroll all the way down in the Store and you will see this option, but you will only get 1 coin per watched ad. So don’t expect it to be easy to get those coins for the packs!

In terms of deck building, the rules for all CCGs apply: try to have a balanced deck, with enough cheap cards to allow you to have what to play in the starting rounds of the game, but also enough higher cost, higher damage cards. It’s very difficult to collect a ton of cards fast in the game and that’s why I didn’t get the chance to actually test out various deck builds, but with the limited amount that I have available, I wasn’t able to build a deck for rush-winning games. So always think about mid to late stage battles where the bigger cost cards will make the difference.

5. Your strategy matters
And it matter a lot. I managed, when I started to play the game, to go all the way to rank 15 using only the basic Selene deck. I kept meeting people playing decks that had cards I had never seen before and each seemed ready to destroy me but I kept winning game after game. This means that even with limited resources to build your deck, you can easily win if you have a solid strategy and a bit of luck.

Your Champion / Hero card is the most important in the game because they can move around and attack. Play a too defensive game and you will lose (this is what 90% of the people do). Play smart: keep cards in front as “shileds,” lure the enemy in and always attack where it’s most advantageous for you. Attack with your melee cards those that have little melee defense and focus on bringing down those with little ranged power with your ranged cards. Never let your enemy deploy too many cards on the board: the one that manages to fill the board will win the game.

In most occasions, I always kept going after the deployed cards and took them out before focusing on the enemy Champion. This made my own Champion weak and it seemed that I was about to lose the game (because in that situation the opponent will almost always focus on your Champion), but every time I made a spectacular comeback. It’s not difficult to make a spectacular comeback when you have 5 or more cards deployed and your opponent only has their champion! So always play smart and be patient. Underworld: Blood Wars is not a game to win with rush decks.

And these would be my Underworld: Blood Wars cheats and tips for you. Do you have other suggestions for fellow players? Let us know by leaving a comment below!