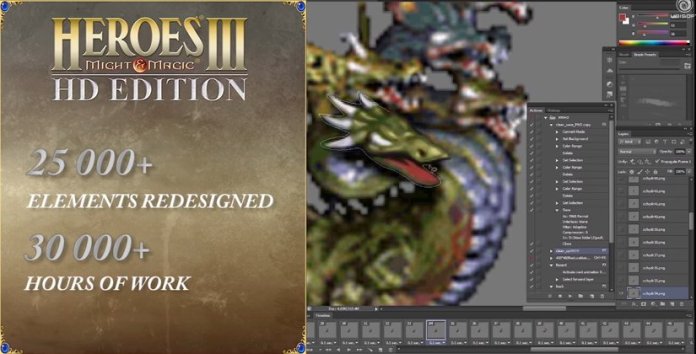 I am a huge fan of the Heroes of Might & Magic series, playing hundreds – maybe thousands – of hours of the first three games, with all their expansions and amazingness (and being disappointed by HoMM 4,like everybody else). Of all, Heroes of Might and Magic 3 is my favorite, with all its expansions and modding – and I must admit that I still get a bit nostalgic and play a HoMM 3 WoG game every now and then, just for fun.

Well, Ubisoft decided that there are more people just like myself who deserve an updated treat from the game, so they have announced that Heroes of Might and Magic 3 HD will be launched for iPad by the end of January 2015. On January 29th, to be specific – and I am sure many people are excited to hear this, while many other will get the chance to experience this cult classic game.

Sadly, HoMM 3 HD for iPad is only based on Heroes of Might and Magic 3: The Restoration of Erathia, which is the original game – so none of the expansions are included. Ubisoft claims that the source code for the expansions has been lost, but hopefully if the sales are good, they will manage to find them somewhere and offer them as updates or DLCs.

Still, even without the expansions and even without the amazing player-made Wake of Gods, the idea of having a true classic brought back to life in HD form, with over 25,000 elements redesigned and improved visually, is extremely exciting. And just for fun’s sake, here’s the Hydra getting its HD makeover for the upcoming version of the game:

So hang on tight, guys! Heroes of Might and Magic 3 HD edition is coming on January 29, 2015 on iPad. No pricing options have been announced, but I really hope that Ubisoft won’t break the game by making it a freemium one.