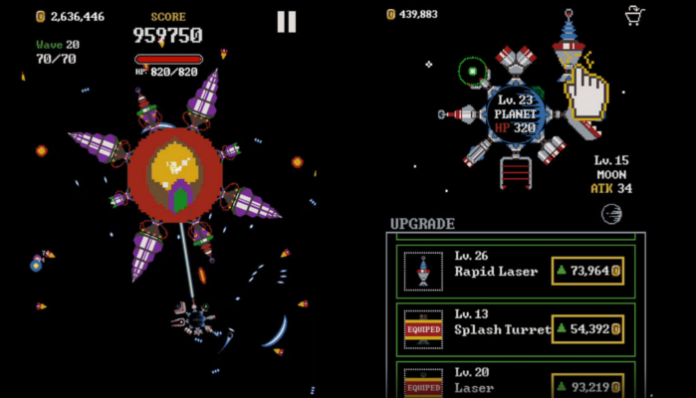 Protect your planet in an all out space war in Turretz! Turretz is a top-down shooter game where your planet rotates on its own, meaning you’ll need to be constantly moving to line up your turretz to shoot down the bad guys! Our Turretz cheats and tips will show you how to get the most out of your upgrades and some techniques on making it through the swarms of enemy ships!

Turretz is a simple game on the surface, but it is deceptively challenging! Here’s our Turretz cheats, tips and tricks strategy guide!

Buy more turretz as soon as you can!

Turretz is going to overwhelm you early on. When you start up your first run through, you’re going to find out quickly that you’re going to need a LOT more firepower! Your single turret isn’t going to cut it, but thankfully you get coins pretty fast in this game. Early on, don’t worry about upgrading your existing turretz – focus on buying as many new turretz as you can.

You have a grand total of eight slots on your planet for turretz, so it’s important to fill them all up as soon as you can. More firepower means more coverage! Covering as much of the screen with bullets is the key to victory.

Don’t box yourself in!

This game’s main method of attacking you is to just absolutely swarm you with little enemies. The best way to deal with this is to take them out as fast as you can. Destroying them slowly will eventually make them start clumping up all over the screen, and if this happens it’s imperative that you don’t box yourself in. Don’t maneuver yourself into a corner – keep an eye out for holes through the swarm.

Keep upgrading your planet and moon!

Don’t forget about your moon either. The moon continuously orbits around your planet, destroying anything it comes in contact with. Moon can really save your butt if you get caught surrounded by a ton of ships – just be sure to move with its orbit.

After every run you can double – and eventually triple – the coins you got by watching a short advertisement. If you’ve got the time and patience, we highly recommend doing so because you can get a ton of coins very easily early on. If you continue to watch the ads after every run, the multiplier will eventually go up to x3, making it rain coins! After you the buy the Laser turret, the next set of turrets dramatically go up in price (from 10,000 coins to 150,000) so you’ll need as much as you can get.

That’s all for Turretz! If you’ve got any space shootin’ tips or tricks to share, let us know in the comments below!