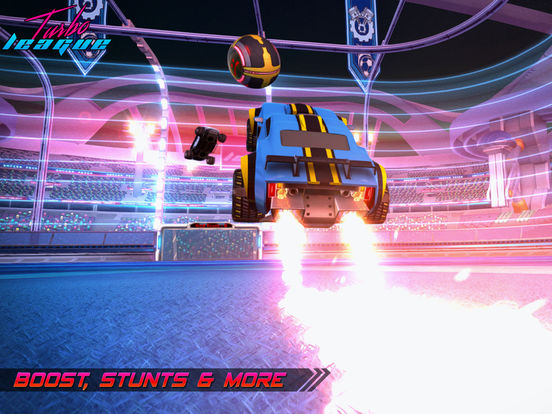 The Turbo League has opened and it’s your time to boost into fame! Turbo League is a mobile clone of the ever popular game “Rocket League”. If you’ve never played Rocket League before, basically think rocket cars plus soccer and there you have the basic premise. Drift and boost around the field and send the ball into your opponent’s goal!

We’ll help you with some tricks in our Turbo League cheats, tips and tricks strategy guide!

1. Change up the controls!

If you’ve previously played Rocket League, you might have a bit of trouble adjusting to the controls of Turbo League. Thankfully there are three different control schemes you can choose from in the settings. You can choose from button steering, a steering wheel that you can slide, and gyro controls. We recommend experimenting around and see what control scheme fits you the best, as nailing the controls down is extremely important especially in a game like this. As a side note, the gyro controls make drifting easier as the drift button is placed on the left side of the screen.

It’s all about physics here! If you want to hit the ball in other ways than just ramming it at full speed, you’ll need to add a little finesse to the mix. When you jump, your car can rotate and spin in all sorts of directions. Turning left or right will rotate your car in that direction, while the accel and brakes will flip you forward and backwards respectively. Combining these manuevers in mid air can angle your cars in ways that will produce interesting results should you hit the ball. For example, hitting the ball with the back top end of your car while front flipping will add some extra force into it, making it bounce some more. Experiment and utilize aerial tricks to hit the ball in ways your opponents won’t expect!

Going off of tip #2, the boost can be used for more ways of hitting the ball other than slamming right into it! Your boost can be utilized to gain air, recover faster, and more. For example, if you think the ball is gonna pop into the air really high, you can jump and point your car towards the sky. Boosting like this will send you into the air like a rocket ship! It’s a bit hard to do because of the control scheme, but once you get it down you can fly around like an airplane. This is one of the best ways to intercept a high ball and set yourself up for an angled aerial hit.

Be careful – your boost meter is finite! You see that number in the boost gauge? Once you deplete a whole rotation the boost count goes down by one. If you run out of boost completely, you’ll need to either buy some more using real money or watch an advertisement. Of course since you start out with 99 it’ll take a while for you to completely drain it, so this is just a heads up.

4. Throw off your opponents!

If you’re having too much trouble with the ball, remember you can just focus your efforts elsewhere! Distracting and interrupting your opponents is just as good as moving the ball around. If you see the ball land into a favorable position for your opponents and you know you won’t have enough time to intercept, try going for your opponent! Boost and crash into them to throw them off course and mess everything up. Not only will you potentially prevent a goal, but it’s extremely satisfying to crash into an opponent.

That’s all for Turbo League. A lot of it comes from your own experimentation, so master the controls and boost through like no other car has before! If you have any other tips or tricks to share, let us know in the comments below!