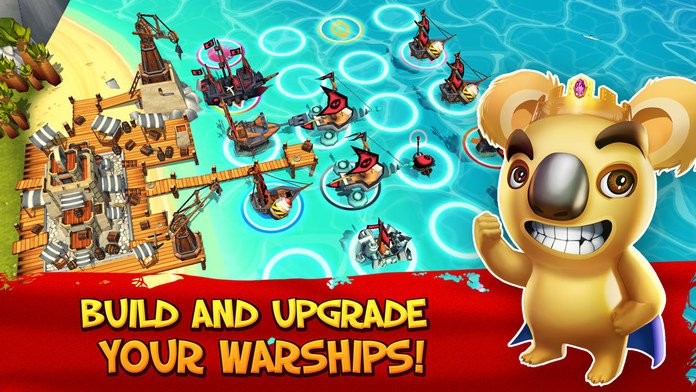 Tropical Wars is a fun and exciting game that mixes strategy with RPG and base building, resulting in a charming game that has a sense of humor and a high addiction rating. It’s pretty complex too and that’s the reason why we decided to help you with some Tropical Wars cheats: tips and strategies that will help you win you battles, develop your island faster than the rest and have more fun while playing the game. This guide is more beginner-oriented, but advanced players should read it too – maybe they can find something useful as well!

So let’s not waste any time and let’s check out Touch, Tap, Play’s Tropical Wars cheats & tips below:

1. Save your gems for workers
Unless you’re planning to spend some real money to speed things up, the best way to spend your gems is to purchase extra workers. Getting to 6 is pretty easy and should be accomplished relatively fast, so don’t spend your gems on anything else until you get those six workers that will make your island a lot easier to develop.

2. Join an active alliance
You can unlock the alliances in the game by tapping the egg surrounded by sharks to the left side of your island. After you do that, start searching for an Active alliance. It’s vital for your alliance to be active because of the missions – if you complete them, you get a ton of extremely useful rewards. Not to mention the fact that your ally members can send you ships or get revenge for your attacks, returning some of the loot you lost in battles. Alliances are extremely useful and you should join one ASAP!

3. Build up your base
Building your island requires a bit of planning and time management. When you are in the game, I would suggest to simply ignore the collection of resources and have all your workers focus on upgrading or researching new goodies. The more workers you have doing the same task, the faster it will be over – that’s why it is vital to have them all focused on research and production when you are in the game, because you won’t spend too much time there anyway but any extra time is useful. As soon as you leave the game, send at least one worker to each resource site and make sure that you still have at least one worker doing research/building upgrades.

Also have in mind that your workers fall asleep after a given period of time, so it’s best to log in at least every several hours to wake them up and keep them collecting resources and doing their job.

4. What should you focus on researching?
There are three buildings that you can conduct research on, and I will write some suggestions on what to focus on each below. However, when you will get stuck researching something important because it becomes too expensive, it makes no sense to completely stop researching, so instead start working on less important stuff. All research is useful! These being said, here is how I would focus my research:

Laboratory: Focus on research that immediately helps your boats and help keep them alive: it’s extremely important for your ships not to die, so focus on their health and shields first.
Town Hall: Focus on things that help around your base and have a guaranteed effect. The Promotion or Respect the Boss to start with are pretty useless. Do those that give you more resources or save you resources first.
Command Center: I don’t find them extremely useful. I would focus on Preparation, Home Game and Nurse first, upgrading the rest whenever I have free resources, workers or time.

5. Guide to flawless attacking
There are two types of attacks you can do in Tropical Wars: Campaign Missions and World Battle (PvP). Both work similarly and certain strategies are better when it comes to increasing your chances of winning. In the campaign, if you hit the wall where you can’t progress, you should try doing the side missions instead: the contracts that are divided into three difficulty categories – do whichever you can over and over again in order to gain more resources and experience for your ships.

Always make sure that you have a full number of ships when attacking and whenever you attack another human player, go in with high level ships otherwise things will be very difficult. Don’t let your ships die – if they do, you will need buoys to bring them back to life or they will be lost forever. You get one buoy for free every 2 hours and the maximum amount of buoys you can have is 10, so always consider that before attacking a human player. If things look bad, it might be best to retreat (and keep your ships alive) instead of losing them all!

The most important ship when attacking is your King ship because it has all those special powers and goodies. Keep it protected and make sure that you always activate its spells and skills, including the healing. If your main ship is lost, winning battles is a lot more difficult.

When attacking, try any or both of these strategies: flank the enemy with the King ship or position it in such a way that its special attacks do maximum damage. Focus on a single ship at a time: destroying them one by one is the best way to winning battles, otherwise you might end up defeated by a bunch of ships that have little health left. Finally, take advantage of the booster spots on the grid to gain extra defense or offense.

When attacking, it might be a good idea to keep your own ships at the back of the grid and as soon as the battle starts, get the ones from your friends and allies at the top (since it doesn’t matter if those are destroyed in battle). This strategy will save you a lot of headaches, as the AI will usually hit the front ships first. In the end, look at what works and what doesn’t and build that perfect strategy that will bring you victories!

These would be, for now, our Tropical Wars tips and trick. If you haven anything else to add, let us know by sharing a comment below.