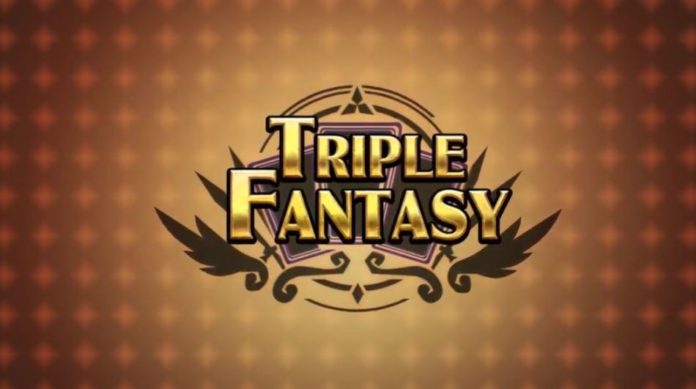 If you wanted some really cool Triple Fantasy tips and tricks (actual tricks, not the in-game ones, but we will cover those too) then this article will cover all of your needs, so you will know exactly how to perform every single combo and deal with all the enemies.

First thing we are going to go tell you is that even with the default cards you can achieve quite a high end result, because if you keep on upgrading them and making the right combos depending on the situation, you will constantly win, so don’t worry about the Legend cards for now, because you’ve got this!

Just follow these Triple Fantasy tips and tricks and you’re good to take on any fight! 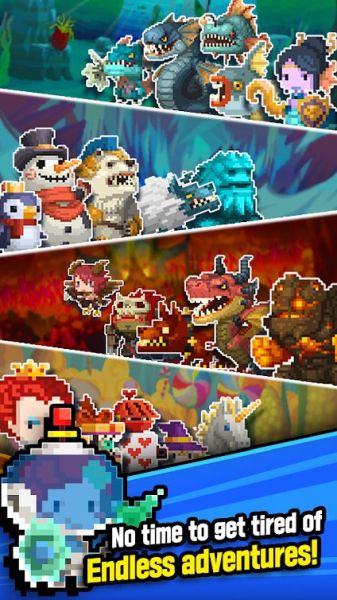 Pay attention to the classes

The Steel class will rely mostly on mixed Health and Attack stats, from Leader Skill to their very own Passive skill. The Magic class has Attack as a main stat and pretty low HP, making them pretty weak to damage, but they do have a little bit of recovery, so there’s that. The Faith cards will have mostly HP and Recovery, deeming them the support of the “team” (or deck, however you want to call it).

Make all the right combos depending on the card type

In the game you can do quite a few combos depending on the type of cards you’ve got. Since in the game there are three main elements (Water, Earth, Fire), you need to use them to your advantage to win the fights.

– Water is strong against Fire and weak against Earth

– Fire is strong against Earth and weak against Water

– Earth is strong against Water and weak against Fire 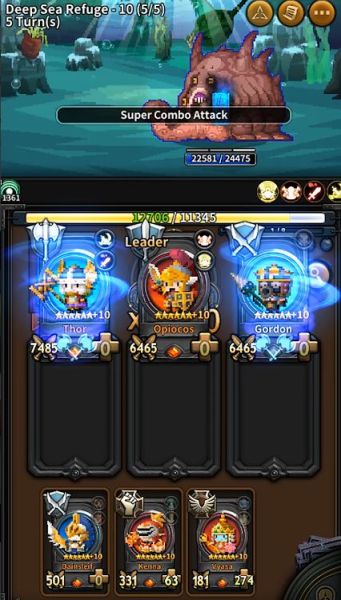 – Arcane: when you have 3 cards each of one element (Water, Fire, Earth), and this will do x2 damage.

– Double: when you have 2 cards of the same job, for example 2 Paladins.

– Triple: when you have 3 cards of the same job, for example 3 Warriors.

– Straight: when you have one character from each one of the jobs within that class (for example in Faith you need all Monk, Paladin and Priest).

Always try to perform the best possible combos whenever you can, because this is going to make a huge difference, especially versus the bosses, which have a ton of HP. The best combos you can do are the Straight and Flush, so try thinking ahead a little bit and when you swap the cards among them try to leave some possibilities open on the side.

There are a few types of summons you can do, but the best ones require patience and time, because they are harder to acquire than the normal ones. 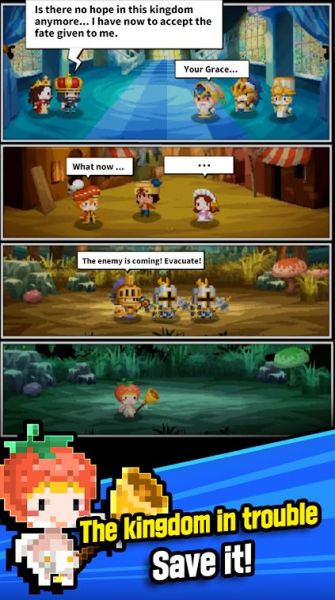 – Element Card x9: costs 90 Diamonds and will summon only the specific element’s cards, 9 of them.

– Daily Card: the free card you can draw every day, and can summon pretty much anything.

– Friendship Card: you can summon a card for the cost of 250 Friendship Points.

The summons you have to pay Diamonds for will never give you Normal rarity cards, but only Rare, Hero or Legend cards. This is the best possible summon you can do, and whenever you collect some Diamonds I suggest going for the Diamond Card x9 because it will give you the best possible outcome.

If you already have quite a lot of cards, you may want to check the Element  Card summons, whenever you can summon the specific element of your wanting. For example if you want a specific Earth card, do the Earth Card x9 summon. 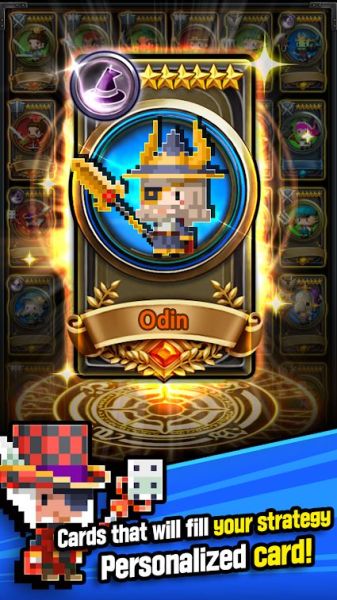 Also, don’t forget to get your free card daily, because even if the chances are slim (0.50%), you can still acquire a Legend card. And it’s free! So don’t forget to do this every day, because you never know when luck might strike.

The Friendship Card is the least profitable of the summons, since it has a straight 0% chance for Legend card. If you don’t need any of those nice orange colored cards, then it’s a decent summon I guess.

The Gold Card is a summon you can perform with 1000 Gold, and it could be considered slightly better than the Friendship Card. If you have spare gold, go ahead and try one, you might get lucky and get a Hero card.

I suggest always saving up on those Diamonds for the Diamond Card x9, because it is the best and I stand by it. Also, whenever you summon cards with Diamonds you will add 1 point per each non-legend card you have to the Legend Counter, and once you have 50 points, you will get 1 guaranteed Legend Card. 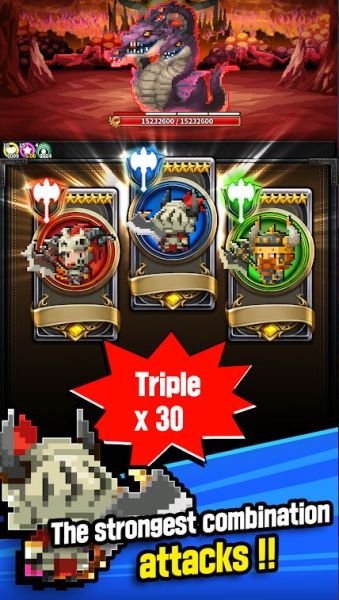 Log in every day consecutively for a week to earn some cool rewards. Do this even if you don’t really plan on playing that specific day, because the consecutive login rewards will reset if you don’t go in game for a day, so it’s really a waste not to take advantage of them.

Check your enemy before the battle

When you go into a new battle, you might want to check the enemy and see what their stats and element are. To do this, simply tap on the magnifier on the right side, and after you do that put into practice what we said earlier with each element. Use this to your advantage and win fights more easily (especially those pesky boss fights).

Whenever you level up, you will receive a Mastery point that you can distribute to enhance that specific combination. We have listed above all the possible combos, so depending on how you like to play (and a little bit on your luck) try to level up the masteries of the most frequently used combo.

Since you can only acquire 40 Mastery points per total, you need to think carefully which one of the skills you want to max first, because you can’t max all of them out! Also, if you did a mistake allocating a point, go ahead and reset it! It will cost 100 Gold per point, but you can then redistribute everything however you want.

If you want to have a spare Mastery page, you can unlock 2 more (1 for 10 Diamonds and the next for 25 Diamonds). After you unlock a new one, you can distribute your points again in that specific page without having to reset the previous ones. 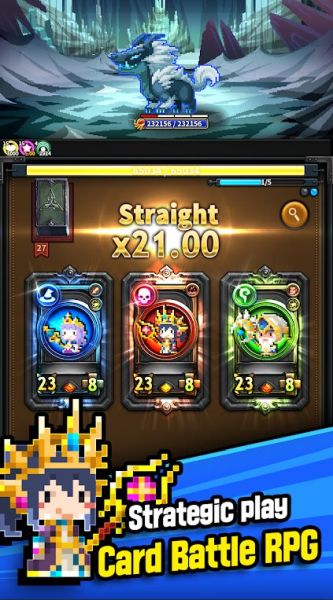 What are those Tricks we mentioned?

Tricks are the little special moves that are not exactly listed on the skill bar (not like there is one, but hey). They are very often used in the general card games, so you might be familiar with some of them if you like those types of games.

To learn them you will need to first level up to level 7 and then talk to the old man Sage. You will have to pay the Gold fee for them, but it’s all worth it because they can really change a battle in the end.

– Peek: This is one of the most useful Tricks out there, because it will let you “take a look into the future”  basically and let you see the 3 next cards, so by using this you can arrange your current cards to have the best outcome  when the next ones arrive.

– Discard all the cards: By doing this you are basically forcing all the 3 current cards into the Graveyard. This is good to use after the Peek if you want to create some super-duper combo.

– Discard one card: By holding and dragging the unwanted card to the Graveyard, you will be able to unlock new combo possibilities. 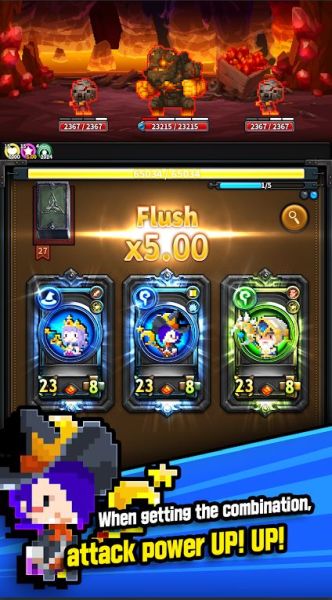 – Swap one card: You can do a quick switcheroo and after taking a nice Peek into the next cards, you could swap a card that you currently have with one of the upcoming ones, and like this unlock new wombo-combo possibilities.

– Always check the enemy’s element / weakness. This is going to give you the upper hand, and when you have the extra cards on the side there with the element you want, always try to use them!

– You can only use 4 tricks per battle, so don’t waste them on the trash mobs.

– Always, always select a friend with strong cards to help you in battle. 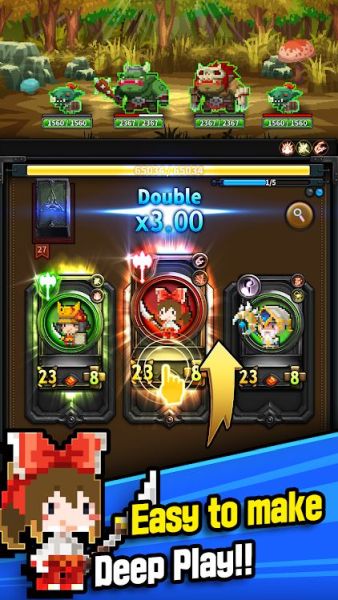 – There is always some type of combo available, you just have to find it and think it through. Always use it!

– If you don’t know them yet, always check each card’s Leader Skill before attacking and use the best one you got.

– If you lost a fight, don’t get discouraged and try upgrading your cards and try again. It might happen because of an unlucky draw, or because of the low level cards.

These would be all the Triple Fantasy tips and tricks we have for you right now. If you know some other cool card tricks (pun intended), leave them down in the comments below and share them with all the other players! 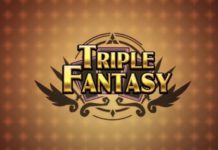 Triple Fantasy: How to Unlock All Heroes