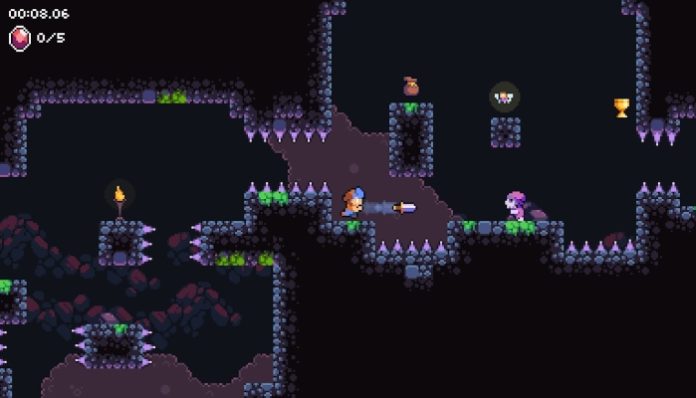 Vincent S. Daggerhood was the best in his craft. A quick-witted and nimble-footed agile thief, there was no treasure that could escape Daggerhood’s grasp. Years go by but Daggerhood is finally caught. To pay for his crimes, he is cast down into a dark and dangerous dungeon.

Armed with nothing but a mystical dagger that can teleport him to its current location, Vincent must traverse a deadly dungeon in Daggerhood, a tough-as-nails action platformer with a teleporting twist.

With five worlds and over 100 levels, Vincent’s adventure will not be an easy one. Run, jump, and dodge your way through perilous caverns filled with traps, scary monsters, and sharp spikes

Vincent also has access to his signature dagger, which he can throw for offensive and movement purposes. Upon throwing the dagger, you can activate it mid-toss to teleport directly to it. You will need to master this mechanic to get through the game’s trickier segments!

Featuring a slick retro pixel art style and a chiptune soundtrack, Daggerhood aims to take players back to the old days where platformers were especially challenging. The game is available now on the App Store for 2.99 USD. An Android version on the Google Play Store will release later.