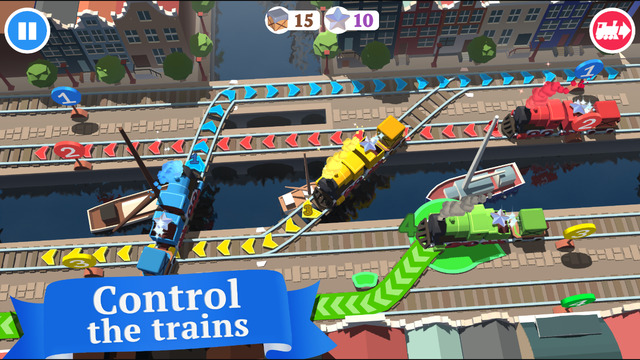 Choo choo! The European railways need a new conductor, and you’re just the person in charge! Train Conductor World: European Railway is a simple pick-up-and-play action game that has you directing trains left and right. These trains are carrying precious cargo, so make sure they get where they need to go safely! We’ll help you be as efficient as possible with our Train Conductor World: European Railway cheats, tips and tricks strategy guide!

After a certain amount of time has passed, levels will gain bonus objectives. If you see a flashing icon next to a city, that means that level has an objective for you to attempt! Doing these bonus objectives is usually worth a lot of coins, so try to do them whenever you see one pop up. When  completing them, the objective will disappear and you must wait for another one to show up. They will remain until you are successful, so don’t worry about messing up. Make sure to turn on notifications to know when the next objectives appear!

When trains first appear on the tracks, they will be carrying a silver star on top of them. As long as the trains aren’t stopped, this will add to your star count once they reach their destination. Every five stars you collect will speed up the trains, which doesn’t sound like a good thing at first but in the long run it means more points and cargo for you! Try to keep everything flowing in an efficient manner so you don’t have to stop any trains, but don’t risk a crash for a star!

When vertically switching a train to another rail, be sure to do it as “straight” as possible. By this, we mean no long switches. Tap and drag the train straight above or below, and not in front of the train. The longer you keep a train in the space between the rails, the bigger chance for a collision you might not see coming!

Every single crash that can happen to you can be prevented by quick reflexes and most importantly, a sharp eye. Be observant and watch all the posts! Train stops will flash when a train is about to spawn on that rail. Listen for loud horns and a red, flashing stop. That means a train that’s going faster than the other trains is about to spawn there, so be careful! Also, if you do let trains come too close for comfort, the game will slow down and you’ll hear the audience gasp in shock. You have about a second to correct your mistake(s), so be quick!

Once you’ve earned yourself quite a number of rail tiles, you might be able to do some rearranging. Check your tiles and see if you can place down any more efficient plans, or heck, you might even be able to reach a new city that was once out of reach. There are even some tiles that have branching paths on them – use these to your advantage!

Rotterdam has cargo trains automatically coming in from any connected city. The more cities you connect to it, the more coins you’ll earn over time. Rotterdam fills up with coins from cargo in about three or so hours starting out, so make sure you come back every now and then to collect your earnings.

That’s all for Train Conductor World: European Railway! If you have any other conducting tips or tricks to share, leave a comment below!