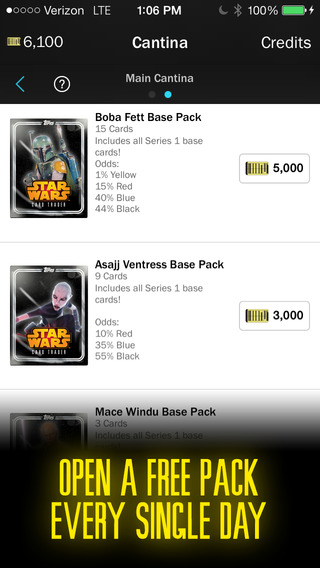 In Star Wars Card Trader, all players can do is purchase card packs with in-game currency, which can pretty much only be obtained through IAPs. Once you have purchased your packs, you can only hope to get cards you don’t already have and rare cards. And that’s that, this is what Star Wars Card Trader basically is about.

While the game may seem like a simple cash grab, Star Wars Card Trader does have an interesting feature that makes its experience more interesting. Once you associate a valid email address to the game, it will be possible to trade cards with other players, who may be making offers for your cards which can be accepted or refused. This feature seems a throwback to older times when trading cards were just for collecting purpose and getting hold of a rare card didn’t mean much outside of the bragging rights coming with it.

Star Wars Card Trader is now available on the App Store. The basic app comes with some free currency which allows newcomers to purchase their first card packs and get started.