Towerlands is a pretty unique tower defense game that takes the “tower” part quite literally: you build and upgrade a single tower that has to deal with incoming waves of enemies.

And in order to make everything easier, we have a bunch of Towerlands cheats and tips to share in today’s guide for beginners and more advanced players alike. We’ll learn everything about the best units, level upgrades and everything else that must be known for a flawless in-game experience.

So let’s not waste a second more and instead let’s check out below our Towerlands tips and guide!

Level up units and modules to the max level

It’s pretty obvious that the higher the level of your units, the better they will perform against the enemy. Therefore, your main goal is to keep them to the maximum possible level.

The max level is decided by two factors: your overall player level and the level of the training grounds. These two work hand in hand generally and you can’t get too far to completely overpower the enemy, but do try to always keep all units at a level as high as possible.

I also recommend leveling up all the units and modules and whatnot equally: instead of having a level 30 units and a level 1 module, it is definitely better to have them all at level 20 or so.

You want as many units and modules and turrets installed, and that’s only possible if you upgrade the level of your tower: not only that its strength increases when you do so, making it last longer in battle, but it also gives you more options in terms of units to bring into battle.

However, it’s not wise to focus solely on leveling up the tower: these upgrades become expensive relatively fast, and a level 20 tower with level 5 units and modules is pretty much useless.

From what I saw, though, you can keep the tower some 5 levels (maybe more as you reach the higher stages) above the level of your units.

Which are the best units in Towerlands?

As you go up the levels, you unlock more and more unit types in the game. Since the number of units you can bring into battle is limited, you will have to decide which ones to invest in – and which are the most useful in your situation.

There are both premium units (you get them with diamonds) or regular ones. The Premium units cost diamonds only to unlock – upgrading them costs regular coins, so you will still be able to level them up if you invest in them.

The Premium units can be considered improved versions of some of the regular options, in my opinion. They will also be available for regular coins later on in the game and in most cases you don’t get that huge of an advantage if you unlock them early. But if you have spare money, it doesn’t hurt as you will most likely use newer units to replace old ones.

In terms of the best units in Towerlands, I think it’s best to have a mixture of direct damage dealing units (like the Archer or Veteran) and those who summon units on the field (like the Old Paladin or Spearman).

Later on, the mages will become useful, but I still manage to win my battles without them, as long as the units I bring into battle are of a high enough level.

But one thing is clear – as you go up the levels, the new units you unlock will be better suited to be used instead of the old ones, so constantly check out stats and skills and replace them accordingly.

I have written a complete guide about the best units and best build in the game, make sure to check it out as well!

Keep collecting from the map

On the world map, you will eventually attack and conquer all sorts of settlements – make sure to visit often and collect the money they produce, as they usually produce them at an increases speed and you can collect often from them.

Level them up constantly as well, but don’t focus too much on these said upgrades as it takes a while to get your money back. I actually recommend to watch ads for upgrades here as spending money on them isn’t ideal.

On the same map, every now and then, a caravan will appear: that’s a new type of attack you can go for and you’ll earn a lot of money and XP points if you win.

The rewards are based on your current level and stage, so the more advanced you are, the better the rewards from the caravan. A good thing about these is that they help you level up faster, which is extremely important for your overall progress in the game.

The caravans are only staying on the map for 60 minutes after appearing, but the sooner you attack them, the sooner the countdown until the next caravan arrives resets, so you can attack more and gain more rewards if you act fast to take them out.

You can watch ads in all sorts of places in Towerlands in order to get some extra goodies, including after winning a campaign battle for some extra loot, but most importantly when your Storage is full, to double the earnings.

While the extra campaign money is extremely useful early on in the game, doubling the Storage earnings becomes mandatory in my opinion later on, as the amount of coins you have there is huge and you get a ton of value for a single ad.

But early on, focus on watching ads for the extra loot as well, because that will help you level up your tower faster and get stronger as a result.

How to invest your skill points?

When you level up, you earn a skill point that you can invest in one of the 7 skills available in the Library.

My recommendation is to invest your first several ones in the XP boost: the more XP you get, the faster you will level up and the more points you will have to become stronger.

Do not invest in the money-making skills as you will get a lot of coins as offline earnings anyway. It would be just a waste of important skill points!

Afterwards, in terms of what to invest in next, things become a matter of personal preference: I invested in the skill that lowers the recharge time for abilities (but the boost itself is really low at just 0.5% per level) so yo can barely feel it.

Critical hit damage increases seem to give you more per invested point, but critical hits are rare so it might still be better to be able to recast abilities sooner – even though it’s not a lot sooner.

But choosing between these two is what I recommend doing after putting some points in the XP boost. Then wait for the better options that become available after upgrading the Tower to level 70.

Additional tips for winning all battles:

1. One of the most important things is to use the special abilities of your units at the right time.

If you summon the soldiers too early, for example, their time on the field might be almost over by the time they reach the enemy. Don’t wait for too long either – just find the best time to attack, without rushing though.

2. Use archers to take out catapults and other archers – these are the most annoying on the battlefield since it’s difficult to reach them otherwise.

When using the archers to launch the rain of arrows, have in mind that there’s a delay between you issuing the command and the arrows arriving. During this time, your opponents might move, so aim accordingly.

3. Do not use autobattle, unless you’re overpowering your opponents without a doubt. The AI handling the battle is pretty dumb, wasting the special attacks and making it difficult for you to win tough fights.

Being part of an active clan is extremely useful long term because you can request resources you don’t have from your clan mates.

Unfortunately, this is the only thing that clans are useful for at the moment, but more exciting things should become available in the future, so until then make sure to join a clan that’s really active – and also donate to your clan mates so that you can grow stronger together!

These would be our Towerlands tips and tricks for now. If you have additional advice for fellow players, don’t hesitate to share your tips in the comment section below. 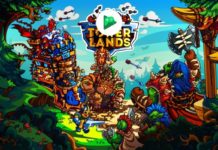 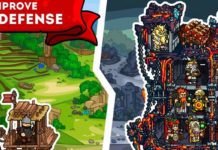