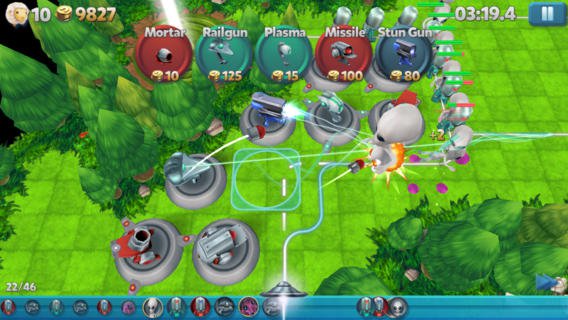 Another tower defense game is now available for download on the App Store. What makes this game stand from the competition is the unique gameplay premise, which seems like it will bring lot of fun to gamers.

TowerMadness 2, sequel to the game developed by Limbic Software, features some strange little aliens who are trying to steal sheeps. As they aren’t common thieves, you will have to emply some unconvential weapons against them , like mortars and plasma cannons.

Gameplay wise TowerMadness 2 isn’t too different from the several tower defense games available on the App Store. You will be defeating waves upon waves on aliens, get more money, upgrade your arsenal and defeat even more tougher aliens.

Among your available options will also be a special move that sends an enraged ram called Bo against some of the aliens.

TowerMadness 2 isn’t the kind of game that tries to break genre conventions to bring something new to the table, that’s for sure. The team has decided to play it increadibly safe, including in the game all the features that are expected out of a tower defense game. Still, some gamers will definitely enjoy the somewhat whacky setting and colorful graphics.

TowerMadness 2 is now available for download on the App Store. The game will cost you $4.99. You can check out how the game in action in the gameplay trailer found right below.