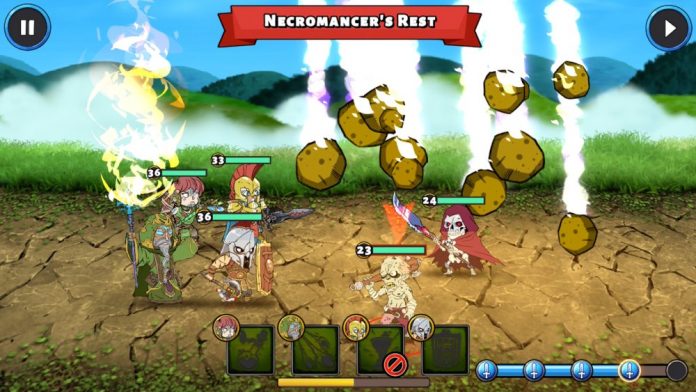 Tower Keepers is a brand new RPG game for mobile phones and tablets with collecting elements. It’s really fun and completely addictive and we’ve been playing it non stop since its launch. We’ve decided to come help you a bit in your quest to unlock more heroes and get the most out of the game by sharing some Tower Keepers cheats and tips. This strategy guide will tell you everything you need to know about progressing quickly through the game and getting the most out of it before everybody else does.

So without further ado, let’s check out below some Tower Keepers tips and tricks to help you progress faster through the game!

1. Focus on the campaign missions
Going through the campaign is what you should focus on at first: the further you get, the more options and goodies you unlock in the game, including the chance for you to get more items for your heroes and unlock more heroes. For each campaign mission that you complete for the first time, on any difficulty level, you get extra rewards which usually have really solid rewards. So go as far as you can in the campaign, then return to complete the missions on the higher difficulty levels for even better rewards.

3. Level up and enhance Heroes
It will be a while before you will have a lot of Heroes to choose from and until then, it would be a great idea to keep the ones you have unlocked at a maximum level, with all their skills unlocked and upgraded as you collect scrolls from treasure and from campaign missions. Don’t forget to equip them with weapons and switch skills if new and more useful ones are discovered.

4. Perform all the side missions
Feasts are incredible in term of rewards and you should always find time to do these: log in when you don’t want to play, spend your food on a feast, grab the rewards then leave the game, waiting for your energy to replenish. Sending Heroes in Epic Quests is also a good thing to do, especially for those moments when you are not in the game actively playing. Try to send the Preferred heroes in each Quest as this will give you more rewards.

5. Craft weapons to equip them
Resources for Weapons or Armor are really difficult to obtain, so it would be best if you only crafted them for equipping your heroes. You can sell them – but that’s best to be kept for weapons you find during your missions and receive as rewards and only if you are 100% sure that you won’t need them to equip other heroes. When crafting an item, you can easily see the heroes that can equip them on the toolbar at the top.

6. Change formation
Before each battle, you can change the way your troops are positioned on the battlefield and you should do this based on your current line-up. Keep the ranged units and healers at the back, while the stronger units with more health should be kept in the front rows. Have in mind that the front units are usually attacked first, so use this to your advantage to have your tanks swallow up damage while keeping everybody safe.

7. Use skills with care
Each Hero has a different skill that they can use in battle when it charges up. It seems that when you use any skill, all the others lose some energy so it takes longer before they are filled back up. This is why it’s extremely important to use the right skill at the right time. Don’t forget to tap your enemies if you want to target a particular one – either with your skills or have your heroes focus their attacks on them.

8. How to unlock more heroes
There are multiple ways to unlock new heroes, but few actually guarantee a new pick. Completing missions and quests will usually reward you, eventually, with a new hero. Using portal stones can also give you new heroes, just as buying them directly from the shop does. There are heroes in the shop that can be purchased using regular currency as well – but they are extremely expensive, so start saving money if you want to increase the number of heroes you have at your disposal.

These would be for now our for our Tower Keeps tips and tricks article. If you have more to share with us, let us know by commenting below.