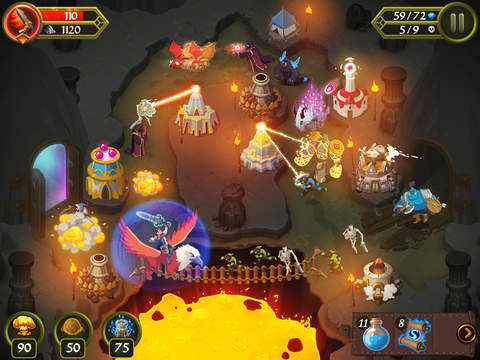 At first glance, Crystal Siege HD doesn’t seem all that different from the myriad of other tower defense games currently on the App Store. The FDG Entertainment game, however, comes with some unique features that do set it apart from the competition.

In Crystal Siege HD players will be riding a griffin into battle, having the possibility to directly attack enemies with short range attacks as well as with elemental spells. Your character can be upgraded in role playing games fashion, with players being able to purchase new weapons and spells, each one with unique attributes. Powering up your character properly is going to be a necessity for boss battles so the role playing game elements of Crystal Siege HD are actually important. The rest of the gameplay experience is not different that other tower defense games, with players having to create a variety of defense mechanism to push away the enemies.

Crystal Siege HD is now available for purchase on the App Store for only $4.99. The game offers an interesting spin on the tower defense formula so make sure to check it out if you’re a fan of the genre as well as of role playing games.