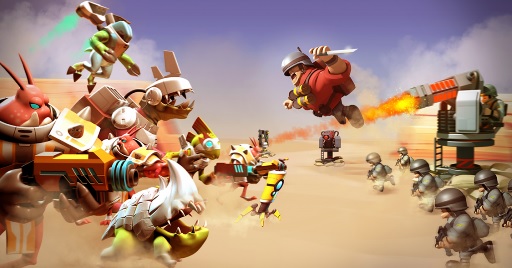 A new free to play tower defense game has been announced today, coming on a yet to be confirmed date date on the App Store.

Alien Creeps is currently being developed by Outplay Entertainment, the team behind other mobile games like Monster Legacy and Idol Words. The new game, which will be a free to play title like already mentioned above, will try to set itself apart from other similar games with its gameplay features, which seem quite interesting from what we can understand.

Alien Creeps will include 50 towers, three Hero characters and plenty of other features gamers expect out of Tower Defense games. By using everything at their disposal, players will have to defend their bases against invading aliens.

Alien Creeps is also going to feature three different game modes, boss fights and even a way to fight friends and foes with airstrikes and reinforcements. Plenty of upgrades, items and more will also be available in the game, which can be purchased with gold. Being a free to play game, we should expect gold to be also available in exchange for hard earned, real money.

Alien Creeps will be released on the App Store on a yet to be confirmed release date. The team hopes to have it available soon. We will let you know when the game becomes available as soon as more news come in on the matter.