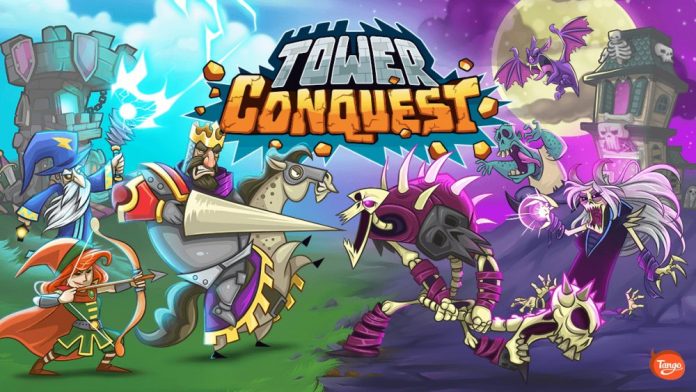 Tower Conquest is an insanely fun and addictive game available on Android and iOS. Complex, filled with zany characters and a depth that doesn’t seem that impressive at first, this is a game to keep on playing! And we’re here to help make that experience even better by sharing some Tower Conquest cheats and tips with you.

Many things should be taken into account when playing this game, one of the most important being the types of cards you have available – and that varies from person to person – but there are still some generic things that count. We’ll cover them all and hopefully teach you a thing or two you haven’t known already in our Tower Conquest tips and tricks article.

So let’s not waste a single second and let’s find out what should be done to get more cards, master all battles and get the most out of this brilliant game!

1. Get your free Cards!
Each day, you get one free random card from the Market – make sure you collect that every day. Also, you can send a squad every few hours to complete a training mission. This rewards you with 3 random cards (or 6 after you reach level 20). Also keep an eye on cards dropped during battles and pick them up before they disappear!

Make sure you constantly do this as it an effective way of Evolving your existing cards or getting new ones to build a perfect deck.

2. Keep your squad units maxed up
A unit’s level can be equal to your level. Make sure you always have all your starting troops to the maximum level and don’t invest anything in troops you don’t use. If you decide to give them a try, you can level them up then. But until that happens, it would be a waste of money to do so.

If you really want to see how a troop performs, you should create a test squad and send it to battle in a previously completed mission. If things go well, level that unit (or those units) up to maximum level.

This leaves you with one extra spot for an extra unit. Depending on what you feel is needed, bring a card in to fill that gap. I usually go for extra damage as one tank and the large Hero unit are usually enough to keep most opponents in their spots. Something like the Radwalker can do wonders if deployed at the right time, for example.

4. Unlocking more units
This is not an easy task and you will need a lot of game time (or money spent) in order to unlock all units. However, it’s fun to do it the free way and we’ve already covered at point #1 some methods of unlocking more units by taking advantage of the free cards.

You will also get unit cards from completing a stage in the single player campaign. My suggestion is to make sure that you get the three stars in each battle before moving forward.

Completing a chapter in the game also rewards you with some nice extra cards. Be careful, though: if in even one mission you haven’t earned one of the three requirements, you won’t get the reward! So replay those missions and make sure you have completely mastered everything before moving forward, otherwise you will lose valuable cards.

Finally, you can wait (for quite a bit of time, I would add) and purchase a premium chest from the market. Even the cheapest one gives you 130 cards and some rare ones, so it’s worth waiting for the funds to get it!

5. Getting three stars in missions
It seems that if you unlock one or two of the “stars” in a mission, you don’t need to do them again if you unlock the other one. So if you, for example, get all but the undamaged tower, you can replay the mission and take all the time you need in order to keep your tower undamaged. This is really good to know as it simplifies the process of mastering the game.

6. How to win your battles
Again, there are tons of different strategies that will work and you would have to adapt based on what your opponent does and how they play. It’s easier in the campaign, because you can change squads before battle – and you should always play a ton of campaign battles in order to get a solid grip on your squad and how to play the battles.

Here are some tips and tricks that help me win the battles easily when I play them:

– It’s extremely important to keep an eye on the mana meter and upgrade it at the right time. Usually, you will get the chance to upgrade it twice before having to deploy your first troop in battle
– Try to wait and allow your opponent to deploy the first card. This makes it easier for you to quickly deploy a unit that can easily counter it.
– Normally, there is no need to upgrade your mana capacity beyond the requirement for your top Hero unit (or 500 – 650 if you don’t have a really expensive unit). It’s better to spend that mana on sending units into battle.
– Always try to protect your weaker units with a tank and send units when they deal most damage. Also keep an eye on the battlefield to collect any power-ups that pop up during the battle: they can give you a huge advantage.
– Never give up! Even if things start to look bad, you can still turn things around if you keep a clear head. Send some tanks, use your tower’s special attack and you can get back in battle and turn it around quite easily!

This would be all we have for you in terms of Tower Conquest tips and tricks. If you have more to share with fellow players, don’t hesitate to do so in the comment section below.