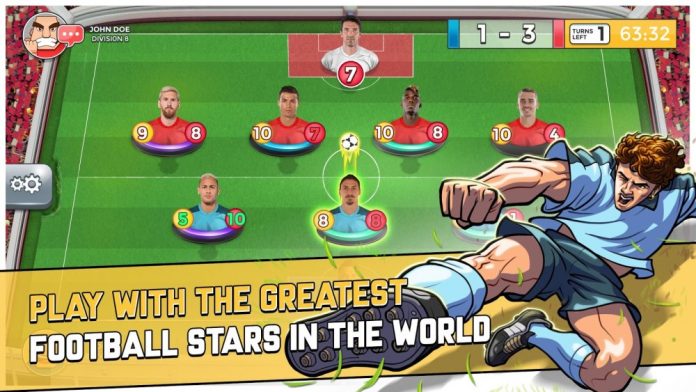 Top Stars Football League, created by From the Bench is, as far as I know, the first CCG with a football theme. Extremely fun and faster paced like more in-depth CCGs (like Hearthstone or Elder Scrolls Legends), this game is a must play for all football/soccer fans over the planet. You have licensed players, intense PvP battles and some really nice mechanics.

Plus, the need to collect them all and upgrade them all – about which we’ll talk in today’s article where I’ll share with you some Top Stars Football cheats and tips. You’ll learn how to win matches, how to collect more players and hot to get better, overall, at this game. It will be fun!

So let’s not waste a single second and let’s check out below some Top Stars Football tips and tricks for the iOS and Android game!

Get all the free boxes
There are two types of boxes that you unlock for free: the actual “Free box” which comes every 3 hours and the Goal Box which unlocks automatically after scoring 10 goals (cumulative) against your opponents. Try to play the game often in order to constantly unlock these boxes. As you do, you will also unlock the regular boxes that you get for winning matches.

In other words, it’s ideal to log in a few times per day and win some matches!

Find the balance between leveling up & your division
In order to level up in Top Stars Football, you will have to upgrade and level up your players. When you level up, your goalkeeper gets more hit points, so it will be a bit more difficult for your opponents to score against you.

Your division is based on the number of stars you have won. You get stars for each match you win, and lose some if you’re defeated. The division you’re in also decides what types of cards you can win – the more advanced your division, the better the cards you can get.

However, finding a balance between the two is extremely important. If you upgrade all the cards that you have, including the ones you don’t use, not only that you will waste money that you’ll need later on when things are really expensive, but you will also make life more difficult for you.

When matches are made in the game, the division (as well as your level) are taken into consideration. And if you have an inflated level based on cards you don’t use, you run the risk of facing a smarter player who only invested in cards they’re using and therefore have better cards than you do. So always keep this in mind and don’t rush to level up just to get that extra hit point!

How to win your matches
From what I’ve seen, the game is really good at choosing equally matched opponents, so your skill and strategy will make the difference in Top Stars Football. So here are a few things I would recommend to have in mind when it comes to winning matches:

– Build your deck with care: players with high attack but virtually no defense are pretty much useless, because a 1/1 player will take out your 5/1 Robben in a second, all while the first will probably cost 1-2 energy, while Robben is 5. Sure, there are moments when Robben can make a difference if you have him behind a wall, but it’s easier otherwise. Build a balanced deck, with cheap players and just a few high cost ones to really make the difference.

– Don’t ignore the Skill cards. Although in other similar games Spells are pretty much useless, they can really make a difference here. They are also usually cheap, making them even better in the long run, after a few upgrades are played.

– Don’t forget about the opponent’s goalkeeper: even though it’s best to try and prevent them from having many players on the board, you must score goals. It’s difficult to win games with more than 2 scored goals, so don’t forget to attack them whenever you have the chance, otherwise you can’t win your matches!

How to unlock more players
Players are relatively easy to unlock, especially since there’s not a huge number of cards available in the game. You get them in boxes and there are three types of boxes that you can unlock: the free box (one every 3 hours), the goal box every day for scoring 10 goals and the various boxes that you win when you win a match. So keep on working on these and you’ll have a nice setup quickly.

You can also buy player cards at the store. The store refreshes every several ours and each new card that you purchase costs more. Clearly not a cost-effective way of improving your deck and unlocking more players, but it’s one of the methods

How to manage your players
The game has a really useful feature: you can see how the players evolve as you level them up. This allows you to easily plan ahead your moves and decide which players are worth working on and which should be upgraded.

In order to get access to this information, simply hit the Lineup button in the main menu, tap a player and hit the Info button. In the new window, tap the button in the upper right corner to see the details and stats of that particular player for each level they can gain. Extremely useful info for planning ahead and upgrading only the players that matter! You can even check out that information for players that you haven’t unlocked, so this feature is pure gold!

These would be for now my tips and tricks for Top Stars Football. If you have other strategies or tips to share with fellow players, don’t hesitate to do so by commenting below.