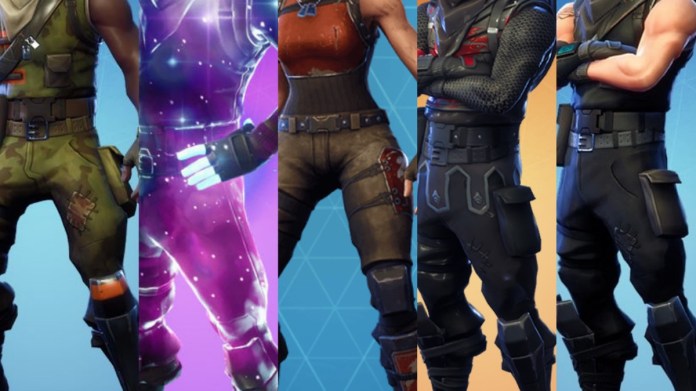 Fortnite has more than 1000 skins with some more popular than others, and others that haven’t been out of the vault for a while. The best-selling skins are reportedly the sports skins such as NFL and Soccer, and The Aura. It is interesting to know which skins are seen less often than Find out below which are the top 5 rarest skins of 2022!

Some of the most rare Fortnite skins are those which we just don’t see very often since their release. These can include skins which were only available to those who purchased a Battle Pass for that season, or ones that didn’t return to the Fortnite Shop. Players who have these skins will be pleased to hear they have some of the most rare skins to date!

This skin is still very rare, and not many players have it in their locker. The Black Knight was only available to unlock through the first Battle Pass in Chapter 1 Season 2. It was rewarded to players who reached level 70. If you see a Black Knight while playing, they are definitely an OG Fortnite player.

This is another OG skin, first seen all the way back in Chapter 1 Season 1. This skin was actually last seen in 2019 but was in the Item Shop a few times between then and its first appearance. If it ever shows up in the Item Shop again, you could purchase him for 1,200 V Bucks, not a bad price for a rare skin.

This skin is especially rare due to it being an exclusive for Samsung Galaxy mobile users, and only those with a Note 9 or Tab S4. Samsung had a partnership with Epic when they first launched Fortnite Mobile, and this skin was part of a limited-time offer. It is extremely unlikely we will ever see it in the Item Shop. It also isn’t seen around much so any one who owns this skin can’t be playing with it very often!

Related: How Many Skins Are There in Fortnite

Renegade Rider was one of the first skins available. She cost 1,200 V Bucks, but players also had to reach level 20 to purchase her. It is doubtful that she will make it back to the Item Shop. If you see someone playing with this skin, you can be assured they have been a fan of Fortnite from the very start.

Just like the iconic Renegade Rider above, Aerial Assault Trooper appeared before Fortnite introduced a Battle Pass. He was in the Item Shop for 1,200 V Bucks, and players had to reach level 15 before getting him. Unfortunately for Aerial Assault Trooper, he is not very popular so you probably won’t see him around the island.

So that’s it for the rarest skins in Fortnite in 2022. As you may have noticed, the list has not changed much since last year. Do you agree or disagree with our list? Which skin would you add instead? Let us know in the comments below!