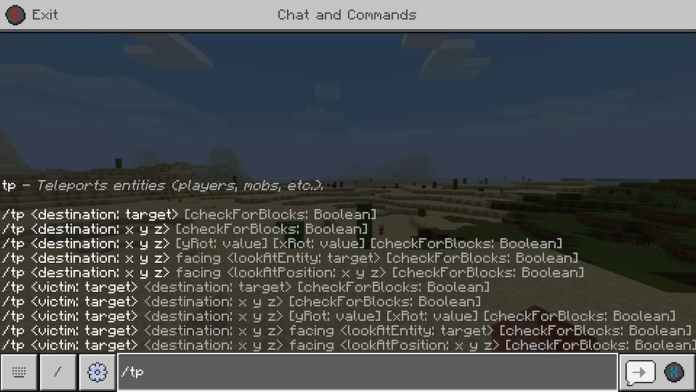 Cheating is usually shunned in the gaming community. But in Minecraft, some features can only be used after enabling cheats, such as commands.

In Minecraft Bedrock Edition, you can enable cheats either when creating a new world or going to the game settings in a world. Once cheats are enabled, you can use commands by entering them in the console/chatbox.

In this article, we have listed some pretty cool commands you can use in Minecraft Bedrock Edition. If you have never used commands, you should give them a try.

Syntax: /tp
Teleportation is one of the many features players have been wanting in Minecraft. Unfortunately, the teleport command is the closest thing in vanilla Minecraft.

With this command, you can go anywhere in the world by entering the location’s coordinates. You can also teleport to a player’s location by mentioning their username.

Syntax: /fill
Tired of filling all the creeper holes around your Minecraft base? Use the fill command to cover all the holes easily. The fill command lets you load a cube-shaped area using any block. You can create tall towers made of netherite or diamond blocks instantly.

The fill command is not only used for filling areas. You can also delete areas by filling the space with air blocks. Since air is an empty block, it will remove all the blocks.

Syntax: /clone
The fill command can feel limiting as it can create cube or cuboid shapes only. Instead, you can use the clone command to replicate exact structures as many times as you want.

Minecraft builders mainly use this command to clone structures in large builds such as cities and towns.

The kill command is the most dangerous in Minecraft as it kills any target instantly. There is no way to escape the kill command’s effect. If you ever find yourself stuck against a powerful mob like the Wither and do not want to die, executing the kill command can save your life.

Without a doubt, /locate is one of the most useful commands in Minecraft. You can use this command to find any structure easily. This command shows the coordinate of the nearest structure you have entered.