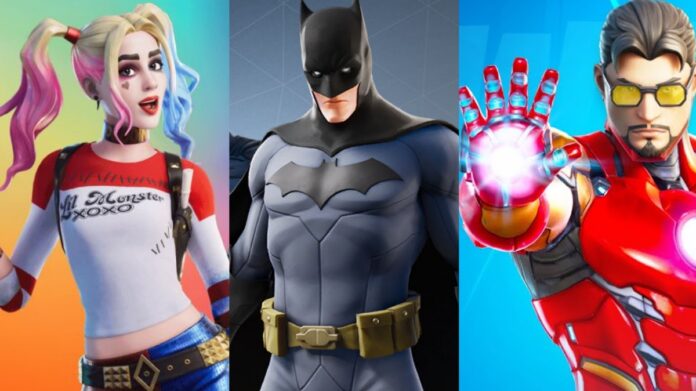 5 of the Best Superhero Skins in Fortnite

In no particular order, here are the Top 5 Superhero skins introduced to the world of Fortnite:

One man’s hero is another man’s villain… This bundle cost 2,000 V Bucks and consists of a Harley Quinn skin and 2 pickaxes, with the chance of completing challenges for an extra Harley style.

Harley Quinn’s Lil Monster style alone would cost 1,500 V Bucks, with the Harley Hitter and Punchline pickaxes costing another 800 V Bucks if bought separately. For only 500 more, players could get the full bundle and the chance to unlock Harley’s Always Fantabulous style too.

This Marvel skin was available to unlock in Chapter 2 Season 4’s Battle Pass, which costs 950 V Bucks. Getting to level 93 unlocked Tony Stark, and then players needed to unlock the Suit Up emote at level 100.

There were challenges to gain the Iron Man skin once it was unlocked at level 100, including driving a Whiplash car, using an upgrade bench, and finally using the Suit Up emote to turn into Iron Man.

This is an unconventional choice and may not be everyone’s favorite, but if you are a fan of Guardians of the Galaxy, this was one skin you wanted badly. Players had to reach level 38 in the Chapter 2 Season 4 Battle Pass to unlock Groot, and then reach level 46 to unlock Groot’s challenges.

Rocket Racoon is a built-in emote used by Groot called “Battle Brother.” It can be unlocked by players who, using the Groot skin, go to plant a seed at a heart-shaped island and then emote. Rocket then appears on Groot’s shoulder.

The Chapter 3 Season 1 Battle Pass offers not just one Spiderman style, not two or even three, but six different styles. Regular Spiderman in his iconic red and blue is unlocked first, then a black version, a white version, and then three colorful variations can be found as players progress through the Bonus Rewards section of the Battle Pass.

The Black Symbiote Suit is unlocked at Battle Pass Page 10 with 8 Battle Stars, while players have to wait until they reach Bonus Rewards page 2 to unlock the white Future Foundation version with 30 Battle Stars! Three variations are available on page 3 (Photo Negative), page 4 (Scarlet Blackout), and page 5 (Gilded Reality), each costing another 20 Battle Stars each.

Let us know in the comments below what superhero skins are your favorite! Do you own any that have appeared in our list?