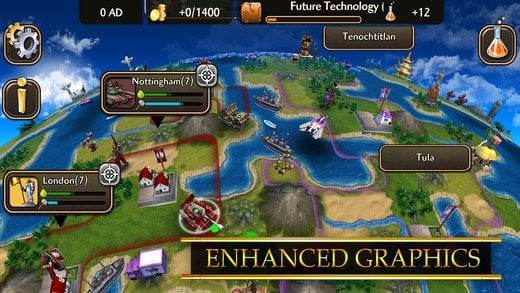 So read on and if you have extra strategies to share, don’t hesitate to let us know!

1. Rush to become a naval power
Or if not a naval power, at least be the first to get access to the Galleon (or the Lighthouse of Alexandria, whichever you think is easier to get in your case) so that you can explore the ocean. The goal here is to be the first to discover Atlantis for the tech boost. Most of the other wonders are also found on islands, so it’s a good idea to be one of the explorers. Not to mention the fact that a powerful navy will keep the enemies away!

2. Plan ahead
You should approach every Civilization Revolution 2 game knowing exactly what type of victory you want to achieve and how to do it. For example, if you want to go for a dominance victory, start to build up your military and get better troops than your opponents before launching a full scale attack. Adapt your strategy for each type of victory and always have a plan to follow (and follow it!)

3. Build a solid defense
No matter if you play an aggressive or a defensive game (e.g. focus on other types of victories), you need a solid defense because chances are that you’ll be declared war upon a lot. Make sure you have walls – a must early on – and archers defending your cities, and that you are always ready to pull at least a few offensive units to destroy the enemy. With these, you’re generally covered and you can focus on expanding your civilization in other areas.

4. Your neighbors are your enemies
The most dangerous civilizations in the game are your neighbors. No matter if they are peaceful or not, they are close to you and you risk getting beaten easier. So consider them your enemies and do all your best to destroy them or take most of their cities. The farther your enemies, the better.

5. Choose the better Civilization
Based on your gameplay preferences, some civs are better than others. Therefore, you should be smart when it comes to choosing the right civilization for your game. Generally, if you don’t know what civilization to pick, go for America or China as they are two of the most powerful in the game.

6. Conquer the high points
Do you have some hills or mountains nearby? Just place a warrior there to act as a scout (but any type of troop will work) so that you “see” better what troops are incoming and you can prepare to greet them. If you can place small armies on hills, you can easily counter attack any offenses coming from the aggressive AI players.

7. How to defend a large empire
Eventually, your civilization will become very large and it will be difficult to have a solid defense in all cities (without losing tech advances and city improvements). Instead, make sure to only defend the borders – but do it well. The idea is to have a solid defense and offense stacked around your border, while the cities in the middle of your civilization can be kept very light on troops.

8. Use the Tech Tree to Your own advantage
This goes hand in hand with the planning tip that I offered earlier. Plan your science too and look way into the future. You need to get to a specific technology? Check out the requirements and focus on getting there! Getting all the techs in order is not the best idea in most games!

9. Expand quickly
The first settler you build is extremely important: you want to make sure that you get a great spot and no other civilization “steals” it. The sooner you build your second city, the easier for you to progress faster. So expand quickly and make sure you’re always pumping settlers to establish a large civilization – but don’t forget that you have to defend it too!

10. Always learn from your mistakes
Even though every new game is unique, there are still patterns to learn. Pay attention to everything that happens in each game and you’ll see that other civs rush to get a specific tech first, and so on. Learn from what’s happening constantly in all games and try to beat the AI to what they’re racing to get. Be the first in the important areas and always learn from your mistakes – next time, make sure you won’t do them again!

And these are our top 10 Civ Revolution 2 tips and tricks. Do you have extra advice for fellow players? Let us know by commenting below!