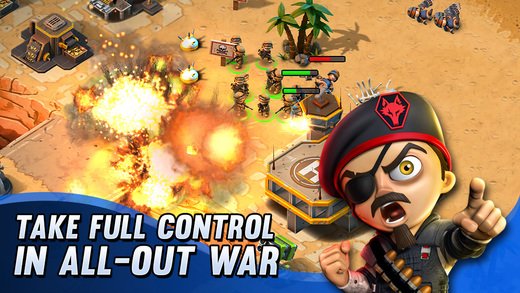 Tiny Troopers: Alliance is Chillingo’s take on the strategy genre made famous by clash of clans. Set in the Tiny Troopers universe and with some new twists to the classic game formula, Tiny Troopers Alliance proves to be a great title for those who love this kind of game. And since a great game challenges you to get better at it, we are here to help you achieve that with our Tiny Troopers Alliance cheats, tips and ultimate strategy guide for beginner players worldwide and everybody interested in the game.

So if you want to build the ultimate base and army, waste no time and check out Touch Tap Play’s Tiny Troopers Alliance tips and cheats for a perfect strategy.

When you’re starting the game, you are under protection (can’t be attacked) for two days. Use this time wisely to get an early advantage and boost up your base by doing the following:

– build up your resource producing buildings and silos first, then upgrade them to the maximum. You need to set up a nice flow of resources, and this is how you do it.
– complete the single player missions until you can’t do that anymore. This way you will get valuable resources and speed up the building of your base
– don’t spend Medals to hurry production. It’s best to wait, because you will use Medals later on to get the third and extremely valuable builder.
– Build up your barracks and upgrade the troops (you need as many as possible when you’ll start attacking other players)
– Max up your HQ levels and finally build up all the defenses that you get and position them in such a way that your resource silos are protected.

If you join an alliance that has a total of at least 5 members, you can take part in the weekly alliance wars and win some incredible prizes. It’s a great ides to join an alliance as soon as possible and reap on the benefits that come from joining one.

Many people in other similar games prefer to keep a really low rank and farm on low level players for resources. Chillingo comes with a nice approach to this with Tiny Troopers Alliance, giving players more time to attack if they have a higher battle rank. This won’t change things dramatically, but it’s an improvement and probably people will have a minimum of medals they’ll want to keep in order to get the most out of their attacks.

How to attack in Tiny Troopers Alliance

Just like all the other similar games, this one has a golden rule when it comes to attacking: don’t send more troops than needed to achieve your goals. You can have two goals when attacking: loot resources and ignore everything else or go for the win and destroy everything. No matter what your final goal is, you should always make sure that you only send the amount of troops required for victory and nothing more, otherwise you’ll be wasting valuable resources! So check out the base you’re attacking, find its weak spot and go for it.

How to build up your base in Tiny Troopers Alliance

You have a small amount of defensive structures in this game compared with others, but the moat plays a major role as it offers just a few routes to the heart of the base. People usually place their defensive structures at the entrance, but that’s a mistake in my opinion. Instead, place a decoy building there to stop the troops or maybe win some time and keep the towers, as well as the resource buildings (or headquarters if that’s what you want to protect) to the middle. It’s difficult to build a perfect base here because the player directly controls the attacks, but this strategy works.

Another working strategy is to spread out your base so that the attacker doesn’t have enough time to get to all buildings. I am still trying to figure out if this is a good strategy.

And these are for now our Tiny Troopers Alliance cheats and tips that will hopefully help you start up your base and get the resources that you need to build the most powerful base in the game. If you have other suggestions and tips, let us know by commenting below.