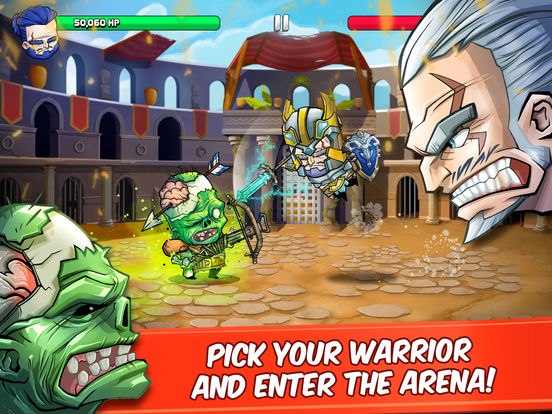 Tiny Gladiators is an action fighting game with RPG elements! During a heated arena fight, you were forced to watch your father fall at the hands of a super powered demon. Your journey of vengeance starts now! You’ll pick a class and create a character, each with their own unique skills. Fight warriors from around the land to train for the big gladiator duels. Winning these duels will help you figure out what happened to your father, and we’re here to help you do just that with our Tiny Gladiators cheats, tips and tricks strategy guide!

One of the safest methods of approaching your opponent is through the air! Don’t just blindly walk towards your opponent as that’s the quickest way to get yourself caught in an unstoppable combo. If you want to press the advantage while still being careful, you’ll need to stay on your toes. That’s why we prefer the air! All fighters can double jump, so do so if you need that extra height. Keep in mind that whenever you attack in the air, you lose all forward momentum because your fighter performs a downward slam. You can utilize this attack to start a combo!

You can block attacks by holding back or away from your opponent. Blocking does not completely negate damage but dramatically reduces it, so it’s still very important. The best times to block are when an opponent is getting up from knockdown and when they’re jumping. If you manage to chain together a full combo, the opponent will be knocked down. In this state they can still be attacked but will be immune to knockback for a second or two. Because of this the computer opponents like to attack as soon as they get up, so it can catch you off guard if you’re not ready.

The second time you should try blocking is when your opponent goes for an aerial approach. Computer opponents will hop around wildly but if they get the opportunity they’ll go for an aerial slam. Block to avoid a combo but be very careful! Opponents can end up behind you depending on how they’re jumping and you might be blocking the wrong way!

3. Don’t worry about the stars!

Each level has three stars for you to fight for. In order to get the stars, your health at the end of the fight must be above a certain threshold. When you’re just first starting out, we recommend not worrying about the stars for now. Tiny Gladiators’ difficulty ramps up very quickly and you’re going to find yourself struggling not even that far in. You can still get coins even if you’ve gotten all the stars on a level, so don’t be afraid to come back later to get any missed stars, or if you just need coins.

4. Don’t forget about your passives!

In addition to your two active skills, you have two very important passive skills. The first one increases your maximum health by a certain percentage. Invest points into this skill as soon as you can, because it can really help chasing those three stars. Your health pool will be a lot bigger, so the threshold for three stars is a lot more lenient.

The second skill is health regeneration. Each point into this skill increases your mid-combat health regeneration by a certain percentage. This is negligible for the first couple of points you put into it, but after a good investment this skill will truly save your life during the later fights. Also, depending on how high your maximum health is, it can regenerate nice bits of your health.

That’s all for Tiny Gladiators. If you have any other tips or tricks to share, let us know in the comments below!