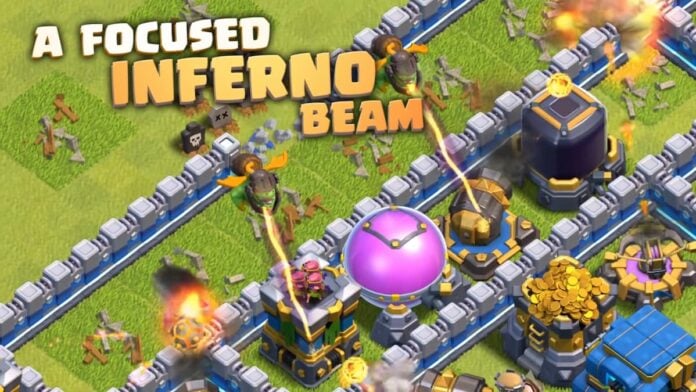 Clash of Clans has a wide variety of troops equipped with abilities and skills. While almost all troops are unique, some have the same background, like dragons, baby dragons, electro dragons, etc.

In Clash of Clans, players can boost baby dragons into inferno dragons using the super sauna next to the trader’s hut. Unlike baby dragons, inferno dragons do not deal splash damage. Instead, they shoot an inferno beam of fire which builds up DPS over time like single-target inferno towers.

Electro dragons and super dragons from the dragon family are more famous than inferno dragons. But these little dragons are nothing to be underestimated. Inferno dragons can wreak havoc on Clash of Clans bases when used properly.

Also Read | How to Use Super Troops in Clash of Clans

How to Three-Star using Inferno Dragon in Clash of Clans

In this Clash of Clans guide, we look at inferno dragons and how to get triple stars using them. Like baby dragons, inferno dragons are squishy and do not have many health points. Moreover, they need a little time before reaching their full damage potential. But before they charge up, heroes and defensive builds like air defenses, x-bows, eagle artillery, etc., will quickly kill the inferno dragons.

Players will need to send tanky defense targetting air troops like lava hound or dragon rider to protect the inferno dragons. These troops will tank the defenses while inferno dragons will take care of other buildings and eventually funnel into the core of the base.