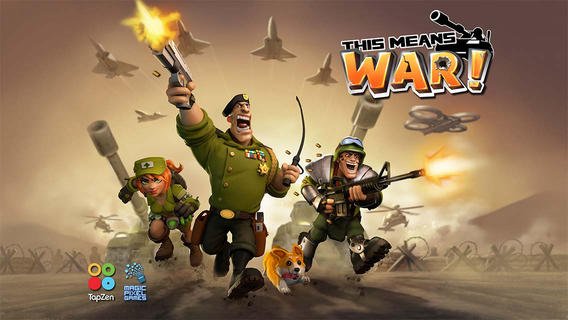 Wow, so it can be done! This was the first thing I thought of when I played This Means War – a game that is pretty much Clash of Clans, but pretty much a completely different experience. A different approach to the battling-side of things, This Means War really proves that there’s a lot of room for improvement in this strategy genre and I am sure that you will absolutely love the experience! And if you do, I am here to help make it even more enjoyable with some This Means War cheats and tips!

I would go as far as saying that – at least for beginner players – this article will actually turn into the only strategy guide you need to read in order to be really great at this game. So let’s not waste any time and let’s check out below the This Means War cheats and tips for an ultimate strategy guide for iPhone and iPad!

Fewer buildings, more upgrades
Different from what we know from other similar games, This Means War offers very few buildings. This means that you should start focusing on upgrading them early on, and the order is extremely important:

Best base building ideas
Attacking works very differently in This Means War, and therefore building your perfect base in the game should follow different rules. Since the troops will always come from the same direction (more or less), you can build up a hard to beat base like this:

Start with a row of walls right at the front, and put behind them a set of your most useless buildings (resource producing buildings and worker stations, for example). Then, follow them with the bunkers (place them centrally to cover the whole base) and towers, to the sides. You want the front/middle area covered as much as possible, but also the sides if some of your enemies are smart enough to go for an alternate route.

Going for this design will ensure your best protection, as most people attack from the center. The flanks will always be pretty much exposed, but at least this way you’ll have better protection for silly attacks.

Best attack strategy in This Means War
When it comes to attacking, you have to consider what I wrote at the point above: your best call is to try and flank your opponents, because it’s usually the flanks that are not well defended. When you launch an attack, deploy your troops to the extreme left or right side of the battlefield. You will avoid the defensive troops (as most of them will launch forward, through the middle, and your own defenses will take them out) and get easier access to the other buildings for the three star win.

What makes this game so amazing is the fact that once killed, your troops will slowly regenerate and you can redeploy them. There are two ways to approach this:

– if you’re fighting against an easy to defeat base, simply redeploy the troops as they’re healed in the areas that you want (close to buildings that you want destroyed).
– if it’s a base that’s harder to crack, wait to get a big chunk of troops before redeploying. Even though this means you’ll risk having the green line pushed back and the opposing troops getting closer to your base, launching a full health attack can cause more damage. And you actually want to as you will skip a turn of opposing troops (which will be taken out by your defenses) and you can focus on bringing down some buildings Do this until you manage to destroy the biggest threats of your opponent’s base, then move to deploying troops as soon as they are healed.

Also, focus on taking out the troop bunkers first as they are the most annoying and difficult to deal with, as they will constantly produce extra defenses. Only afterwards you should focus on the enemy’s defensive turrets and other troops. Finally, make sure that you learn the way troops work: some are best against a specific type of troop but weak against another, so make sure you only deploy troops that give you an advantage over your enemy.

Go into attacking other players early on
You should start attacking other players as soon as possible as you will get more resources from doing so than from waiting for the shield to go away. Since it costs you nothing at that early stage to search for a new target, just keep searching until you can find a base that’s easy to beat: few defenses and lots of resources. Rinse and repeat to get your base up faster than others! Make sure you lose some battles too, and keep your rating low, to be continuously pitted against easy to defeat players.

And these would be my strategy tips for fellow This Means War players. Put them to good use and you will soon become the best general in the game!