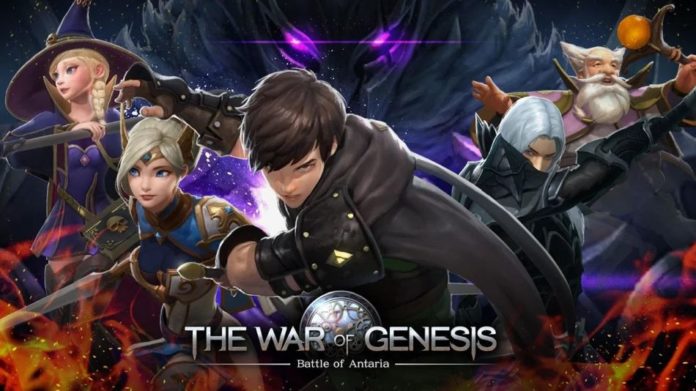 The War of Genesis: Battle for Antaria best heroes list we will share with you in today’s article will help you choose the very best heroes to add to your team, from each of the five elements, so you can deal with every type of enemy without any issues!

The heroes we will feature are mostly the five star heroes, since they are not that hard to get if you constantly do your summons, and you might even land some very powerful ones early on if you followed our guide, but we are not forgetting the lower star level ones either, so don’t get discouraged!

Thus being said, let’s not waste another second and dive right into our The War of Genesis: Battle for Antaria best heroes!

This is the top of the list as it is one of my absolute favorite characters, not only because of the sheer power he has, but also because of the huge amounts of damage and possibility to stun the enemy for 2 turns. 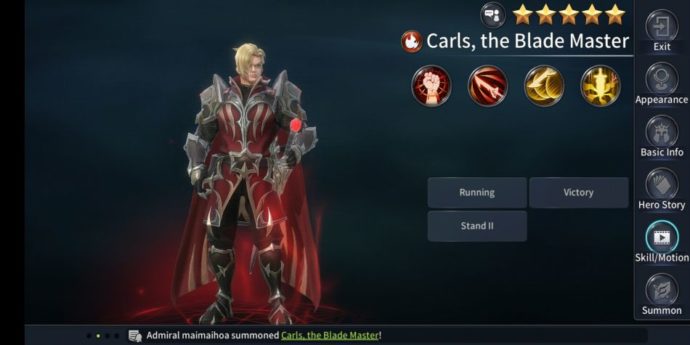 Doom Blade: deals additional damage to the enemy if it’s health is below 50% and for 35% of the damage dealt.

Spiral Trap: does AoE damage and attacks 3 times, and the more buffs an enemy has the more damage they take.

Earth Crusher: does AoE damage and ignores 30% of the enemy’s defense, with a 75% chance to stun the enemy for 2 turns.

She is one of the heroes that you get for free from the daily reward (on the 7th day) and she is pretty good for a free character, especially if you team her up with other good heroes. 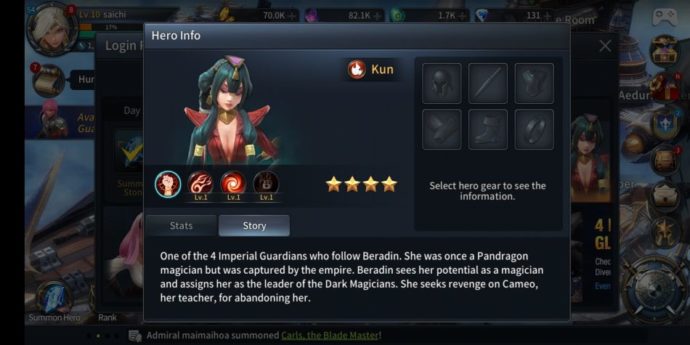 Fireball: attacks an enemy and does additional damage to the surrounding enemies with more debuffs, with a 50% chance to decrease the enemy attacks by 50%.

Triple Elemental Blast: damages all enemies in an AoE radius, preventing the enemies from receiving buffs for 2 turns. Her attacks have a 35% chance to stun the enemies also.

Grudging Flames (passive): she takes the first turn in all battles and always attacks with a type of advantage.

She is one hero I tried to summon for a long time now, because her kit is very good both for the team, but also for boosting her survivability (with the chance to block). Another plus is that she looks really good, so she would boost the looks of any team! 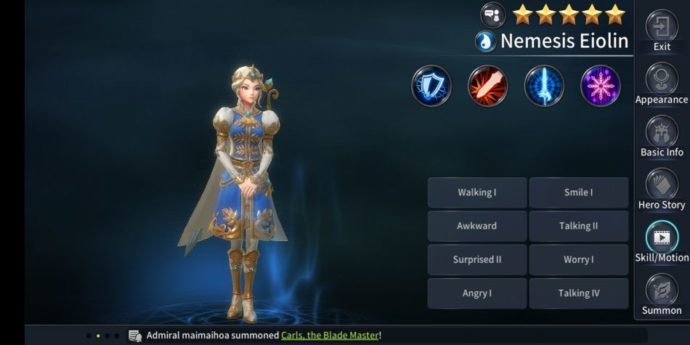 Chaser’s Blade: does damage to an enemy with type advantages and deals additional damage depending on the enemy’s HP, with a 50% chance to block heals for 2 turns.

Blizzard Storm: does AoE damage to all the enemies, dealing bonus damage based on their HP, with a 50% chance to freeze them for 1 turn.

Nemesis (Passive): buffs all allies, increasing their Crit Chance by 30% for 1 turn at the start of the battle.

For one of the free heroes that you get for simply playing the game and completing the quest line, he brings a lot of useful skills to the table, so he is definitely worth mentioning as one of the best Water type supports. (and come on, he’s free!) 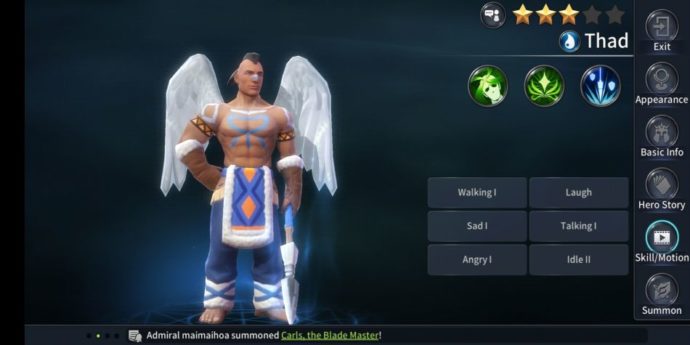 Airborne Strike: damages an enemy with a 35% chance to inflict a Sleep on them, and also freezes the enemy for 1 turn if their Hit Acc is lowered.

Warcry of the Sky: damages an enemy dealing 20% of Thad’s HP as extra damage, decreasing the enemy’s Hit Acc by 50% for 2 turns.

I like Styner because he is a great hero that synergizes well with the HP gear, since his all kit basically revolves around that. He is also kinda tanky because of that, and given that he has a taunt, Styner is definitely a great addition in my opinion. 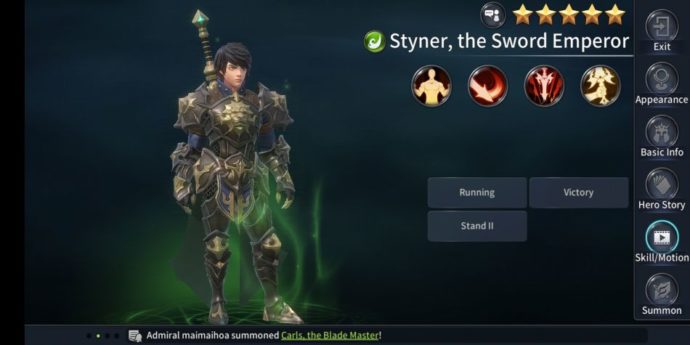 Rakshasa Sword: deals damage to an enemy depending on Styner’s HP, with a 45% chance to Taunt the enemy. If the Taunt succeeds, the enemy’s turn will be delayed by 1 turn.

Asura’s Heaven Break: does AoE damage, dealing damage 2 times depending on Styner’s HP, with a 35% chance to stun the enemies for 1 turn. Attacks with Extreme Asura’s Heaven Break and deals 15% of caster’s lost HP as additional damage if the caster’s HP is 50% or lower.

Extreme Single Combat (passive): decreases Styner’s skill cooldown by 1 turn if his HP is 50% or below, while he is also immune to stun, sleep, freeze and taunt.

If you can get this hero, I think he is a great addition to the team for the fun skills he has. He not only looks good, but is pretty powerful too! Yil Ji Mae can also revive himself, which is good for those prolonged battles, especially given the fact that he has DoT. 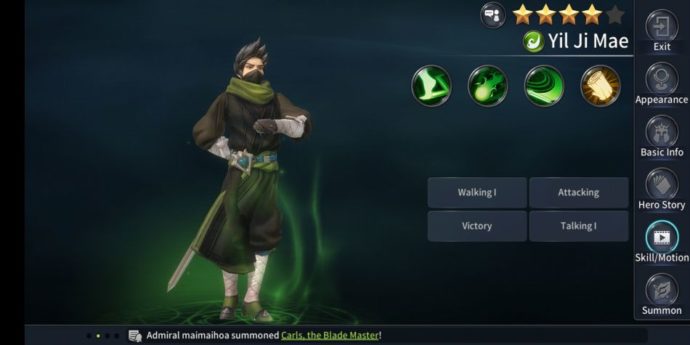 God Wind Strike: does damage to an enemy depending on Yil Ji Mae’s SPD, and if he does a Critical Hit then he will inflict damage over time for 2 turns.

Miserable Weakening: deals damage to an enemy based on Yil Ji Mae’s SPD, delaying the enemy’s turn by 2 turns.

Plum Tree Transformation (passive): when Yil Ji Mae dies, he has a 50% chance to be revived. When he gets revived he will attack the enemy with Miserable Weakening and he takes 0 damage from 1 attack for 2 turns.

That’s right, there’s another great Carls, the Blade Master that can not go unnoticed. The Light type of Carls will do quite a lot of damage to the enemies, and will also boost his team quite a bit, so I consider him pretty good! (probably not as good as the Fire one, but he still is pretty decent, especially if he goes versus a Dark type of enemy). 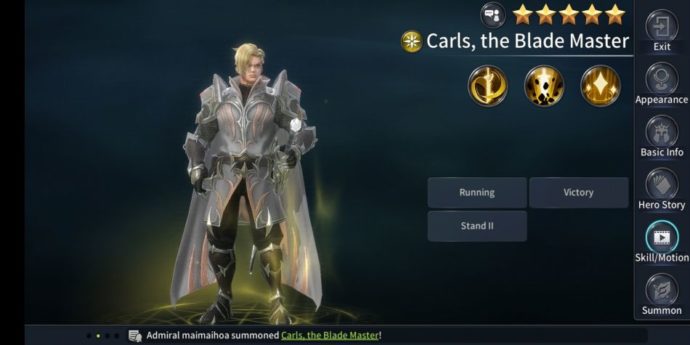 Sword of Betrayal: damages an enemy, and does even more damage to the enemies with higher DEF, and if an enemy dies from Sword of Betrayal, Carls’ team turns will be pulled forward by 1 turn.

Earth Smasher: does AoE damage depending on Carls’ HP and ignores 30% of the enemy’s defense, with a 50% decrease the enemy’s DEF by 50% for 2 turns.

Deflective Radiance (passive): Gets a barrier when an enemy attacks Carls at 30% HP or lower. He also uses 2% of his HP to decrease damage taken by 25% on allies when hit by a Critical Hit.

For a 3* hero, Duran is pretty decent given that he is a good tank (with a taunt) and pretty good debuffer. He is pretty good in any team, and quite tanky with a build relying on DEF mostly. 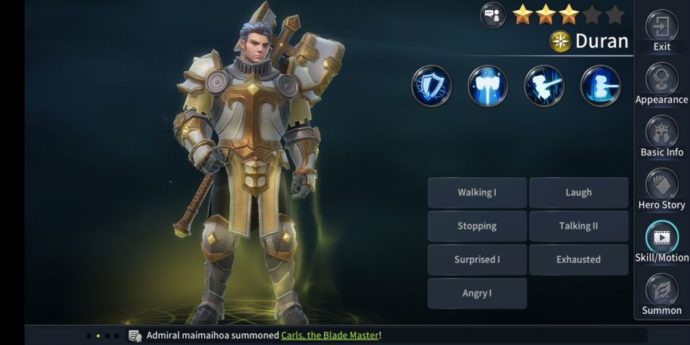 Power of Light: damages an enemy depending on Duran’s DEF, with a 50% chance to taunt them for 1 turn.

Pulverizing Anvil: damages an enemy depending on Duran’s DEF, decreasing their ATK by 50% for 2 turns.

Divine Punishment: damages an enemy depending on Duran’s DEF, removing all buffs on an enemy.

This is one of the most badass and good looking heroes in the game. He has massive (and I mean massive!) damage, most precisely burst damage, which lets his delete the enemies in close to no time. 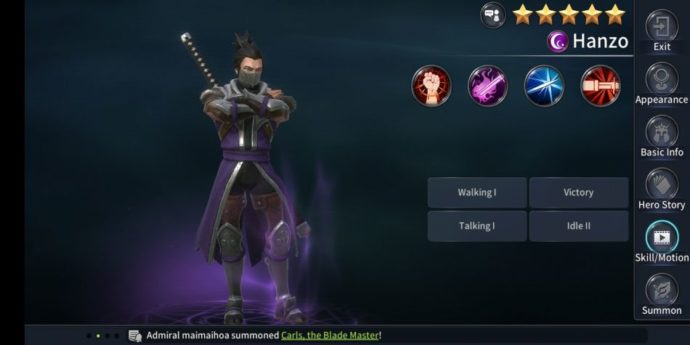 Shadow Slash: damages an enemy and ignores 20% of their DEF, while also decreasing their DEF by 50% for 2 turns if their DEF is higher than Hanzo’s.

Grim Shadow Killing Zone: attacks an enemy 8 times, with a 25% to deal DoT for 2 turns for each attack.

Payback (passive): Hanzo paybacks when an enemy attacks him, obtaining 20% of his HP as a shield for 1 turn when dealt a critical hit.

She is good especially when there are fights that go on for a long time. She is able also to revive allies and inflict a ton of debuffs on the enemy, which prevent them from healing, which as I said, for a long and tiresome fight, are great skills! 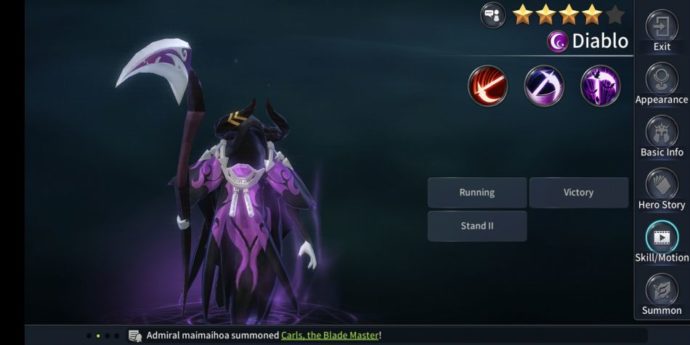 Condemn: damages an enemy with a 75% chance to reduce the enemy healing for 2 turns. Finishing hits with this attack also prevent the enemies from getting revived for 1 turn.

Shape of Pain: does AoE damage and also deals 70% additional damage per 0.01% debuffs on the enemies, while also preventing the enemies to get revived if they die by this attack for 1 turn.

Reserved Destiny (passive): revives an ally with 30% HP and makes them invulnerable for 1 turn when an enemy dies killed by Diablo. The revived ally also has all of their skill cooldowns restored, and Diablo gets healed by 45% of the damage done.

In my opinion these are The War of Genesis: Battle for Antaria best heroes, which I have thought of carefully. They might not be fit for your playstyle, because everyone has a different approach to the game and how they choose to do it, but I strongly consider that those are some of the best choices out there.

Some of them are not difficult at all to get, and some can be a real pain to farm for, but nonetheless if you choose to try your luck again and again for one of the hidden 5* gems, such as Hanzo or Nemesis Eiolin, it will be all worth it in the end.

If you want to get better at the game and not miss a single opportunity, you can take a look at our guide right here which will tell you exactly how we have gathered a few good 5* heroes from the very early stages even, and how you can do it too!

Thus being said, our The War of Genesis: Battle for Antaria best heroes list is complete! If you have other suggestions and preferences, leave a comment down below and tell us which heroes you like and why! 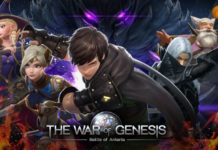 The War of Genesis: Battle for Antaria Cheats: Tips & Guide to Form a Strong Team