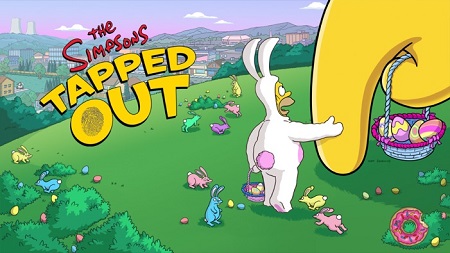 A new update is now available for The Simpsons: Tapped Out, the casual game based on the highly successful series created by Matt Groening. This update isn’t exactly a surprise, as the game developed by EA Mobile has received other updates just in time for Halloween and Christmas. Springfield is definitely a town that knows how to celebrate, that’s for sure.

The new Easter Update will introduce a new feature in the game in the form of easter bunnies. By tapping them they will drop eggs, which can be collected and traded in return for Easter Boxes containing Easter themed prizes.

The Easter Update also includes some new characters like the Crazy Cat Lady and Father Sean as well as two new buildings – the Banana Dictatorship and Johnny Fiestas.

The Simpsons: Tapped Out is a free to play game released almost two years ago on the App Store, developed by EA Mobile. The game’s main focus is to help Homer Simpson rebuilding Springfield so expect to meet several characters taken from the series, each one with its own share of wackiness. Tapped Out is quite a simple game that doesn’t play too different from many other similar titles, made more engaging by the inclusion of The Simpsons series’ characters and locations.