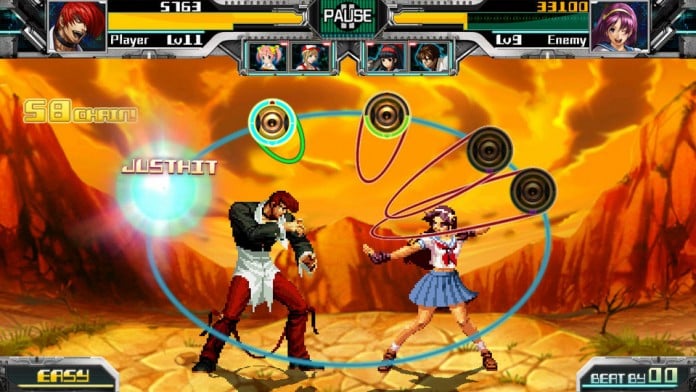 The King Of Fighters series is going to receive a new entry on iOS platforms soon. And not just a regula entry of the series, but an unusual game that’s better suited for a mobile environment.

The Rhythm of Fighters has been recently announced by SNK Playmore and, as the title suggests, it’s going to be a rhythm game based on the series.

Not much is currently known about the game, other than the fact that the game is going to include a lot of classic SNK tracks. Judging from the released screenshots, the game uses the same 2D graphical style of older entries of the series and a system that allows gamers to perfom combos and special attacks by completing rhythm-based actions.

The game doesn’t look different from another rhythm game based on a popular video games series, Theathrythm: Final Fantasy, which combines some of the staples of the main series with some rhythm games’ features.

The Rhythm of Fighters will be released on a yet to be confirmed release date on iOS. We’ll keep you updated on the game as soon as something new emerges on it so stay tuned for all the latest news.

The Rhythm of Fighters Announced, Launching Soon On iOS