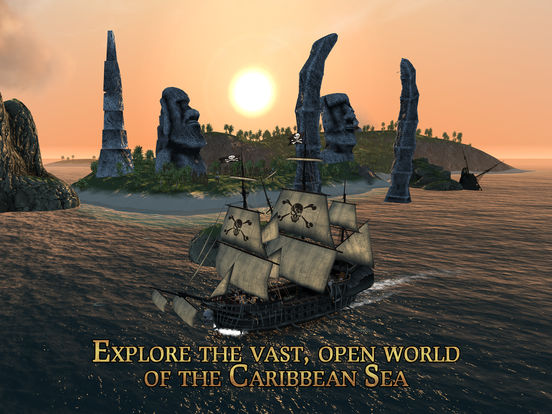 Legendary pirate captain John Rackham has tapped into ancient voodoo magic, and now he’s on a quest to bring the Flying Gang back from the dead. The Pirate: Plague of the Dead is a high seas open-world pirate adventure. Follow Rackham’s story as he resurrected his fallen crew or sail the seven seas in search for treasure and adventure! Our The Pirate: Plague of the Dead cheats and tips will help you get your swashbuckling adventure started!

There’s lots to do in this great pirate adventure, so don’t feel pressured to complete the story. You can simply sail and fight ships if you so wish, and our The Pirate: Plague of the Dead cheats, tips and tricks strategy guide will show you how to get the most out of your adventure!

You will see a line of three arrows pointing in a direction around your ship. This denotes the current direction and speed the wind is flowing in, and you’ll need to maneuver your ship accordingly. If you point your ship in the exact opposite direction, you’ll see a red cone start to form. This is the no-go zone, and if your ship is facing the center of it, you’ll hear one of your crewmates that you’re in the “irons” – this means that you’ve got zero forward motion.

To work around this you’ll need to build speed from the wind, then rocking back and forth through the opposite direction. Be sure to speed up the game time if you want to make this process go by a little quicker. It can be tough sailing against the wind, but it’s possible!

Use flags to get the jump on enemies!

The tutorial will teach you how to trick enemy ships into thinking you’re from a specific country. This allows you to get the first strike on them as they won’t be hostile to you when you’re in proximity. It’s important to keep in mind that you can only do this once before you’re marked as a pirate, thus enabling any further enemies to see through your disguise. To remedy this you can change the name of your ship, but it’s quite costly to do so. Make your surprise attack count, as you may not get another one for some time.

When visiting a city, you can stop by the local tavern. If you buy a round of beer for the people inside, you may hear some gossip and rumors, which usually amounts to the current price of items. You may hear that a certain item is super cheap somewhere or expensive. Check the city’s shop and look for any prices that are highlighted in green – that means it’s selling for cheaper than usual. In addition to buying lots of the item and using it for yourself, you can also travel on over to the town where the item in question is expensive and sell it back for profit. Buy low, sell high!

Each of the commodity items have battle usage. Rum, for example, will temporarily boost your ship’s speed by 10%. Keep in mind however that you need a specific captain equipped before you’re able to use the item like this.

Stay on the move during combat!

The quickest way to end up in Davy Jones’ locker is to remain a sitting duck during a battle. Don’t just sit there and let the enemy take free shots on you – stay on the move! Rotate the camera so that you can keep the enemy in your sights and use the appropriate guns. Try to align your target with your targeting cone so that they meet at the very end of the cone. If your target is too close to your ship, your shots will end up flying right over them.

Don’t forget about your captain’s special ability as well. Certain captains have active abilities that can be used from the submenu above your sails’ button. If you see an (A) next to the ability, that means it must be manually activated while a (P) denotes a passive ability that is always active. For example, Edward Teach’s explosive powder kegs is an active ability that lets your ship drop explosive barrel traps behind it. Great for getting ships off your tail!

That’s all for The Pirate: Plague of the Dead! If you’ve got any other tips or tricks to share, let us know in the comments below!