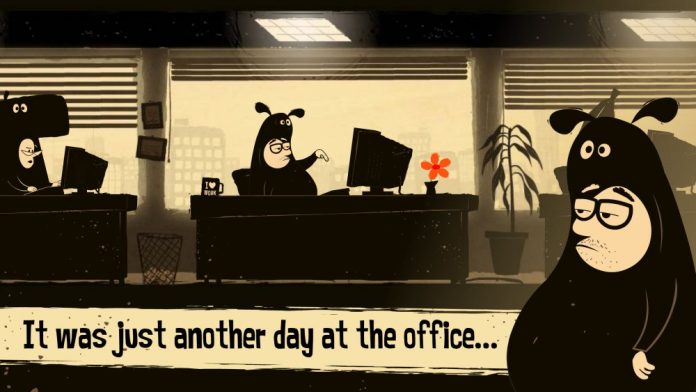 The Office Quest is a charming and fun adventure game for fans of the genre, available on the App Store and on Google Play. It has a delightful main character and mind-bending puzzles, so it’s only natural that you’ll get suck eventually. But I’m here to help by sharing with you a complete The Office Quest walkthrough!

This guide will share with you all the steps you need to take in order to complete the free part of The Office Quest. So if you got stuck along the way or you just want to cruise through the game faster, check out the walkthrough below.

1. Tap the red flower, then tap the red ball it creates.

2. Tap the lady to the left so that the office guy can safely leave the area.

4. Tap the far right side of the screen to leave that area.

5. Tap the broom to pick it up. Go left to the previous area and tap the Pinata. Pick up the hammer.

6. Go right again and tap the tool box. Tap it again when the worker is not using the hammer.

7. Tap the fire alarm to break the glass then tap again to activate it. Quickly tap the machine to jump inside and when the boss is checking out the alarm, tap the right side of the screen.

8. Tap the open door. Tap the elevator’s switch then tap again to enter.

9. Tap the floor to get out, then tap the box above the elevator.

10. Looking at the clues to the right, tap the stars on the left to find their pairs. Make sure that you’re making your choices based on the cables final position (so second cable is actually paired with the first image – the lock, the fifth cable goes with the second image – the rain and so on).

If you can’t do it, here is the solution:

11. Tap the lamp to get the light bulb, then tap the painting above it. This is a simple sliding puzzle for you to solve.

14. Tap the coffee machine to the right of the screen, then tap the jar with a chili on it.

15. Tap the top of the machine – where two chilis are shown, then grab the cup of coffee. Tap the left side of the screen.

17. Tap the coffee cup closest to you to get under the table, then tap again it when the guy is eating the sandwich, so that you switch cups.

18. Tap the right side of the screen to get out then tap the light above that keeps blinking. Tap it again to change he bulb.

19. Tap the right side of the screen to move there, then tap the fly buzzing under the light. You have to tap it again, but tap the timing right so that your bird catches it – tap when it is in the bottom of the screen and slightly to the right.

21. Tap the left side of the screen to get out, then tap the fan twice. Pick up the dropped pen.

22. Go to the room to the left and tap the coffee machine. Brew the heart coffee there and pick up the cup.

23. Go to the room to the right, get under the desk and tap the coffee cup to the left. Tap the chart, then once the whole group is partying, tap the left side of the screen to exit the area.

This is as far as you can get in The Office Quest for free. It’s a beautiful game and I am sure you’re curious to find out how the adventure ends – for that, you will have to purchase the entire game. And if you get stuck playing it, worry not as we’ll soon share with you the second part of the walkthrough for the rest of the game!