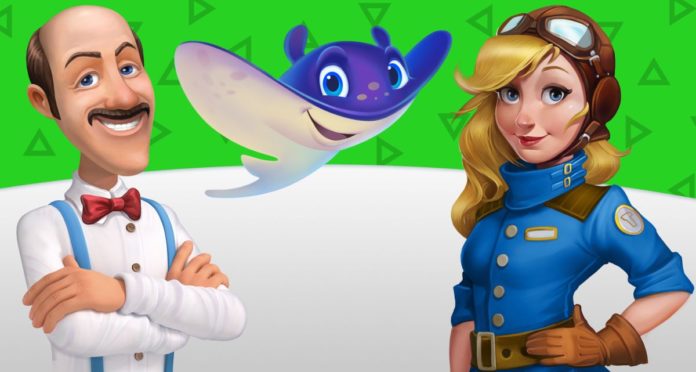 As SocialPeta‘s statistics suggest, Playrix’s games have been downloaded more than a billion times in the App Store and Google Play as of May.

Gardenscapes and Homescapes, two of Playrix’s games, are well-acknowledged as being among the Top Grossing 10 games of all time. From the perspective of download volume and revenue, the United States is undoubtedly the largest market for Playrix.

1. Start from PC Games and Flourish with Casual Games

Founded in 2004, Playrix initially worked on PC games and screen savers. With the surge of mobile games, the company identified and decisively seized the opportunity. Once released in 2013, Township, its first IOS game, witnessed great success.

With a continuing focus on casual games, Playrix released Gardenscapes in 2016, a Match 3 game incorporating elements of “building” and “narrative”. Apart from creating new ways to play such games, it laid the groundwork for its sequel Homescapes. With Austin the butler as the main character, both games pushed the plot forward through Match 3.

Playrix’s correct judgment of the market was subsequently verified. Even three years after its release, the two continued to generate revenue for Playrix as a major source.

2. Stay Ahead with High-frequency Creative Output

Given the intense competition and fast iteration in the casual game market, the continued lead over other games is largely determined by the UA team in addition to game quality, and Playrix is a prime example of this.

According to SocialPeta, an advertising spy tool, Playrix has launched more than 240,000 (de-duplicated) ads over the past four years, with an average of more than 150 per day.

It’s crucial for the UA team to ensure constant ads for the market. Obviously, Playrix’s UA team has a good command of the unique craft of delivering more flow while ensuring the frequency of advertising.

Next, we’d like to take TownShip, Fishdom, Gardenscapes andHomescapes as examples to conduct exploration of the rules of Playrix’s advertising.

In light of the trend of advertisers’ creative types over last year from SocialPeta, the ad creative types of the four games were highly diversified, including but not limited to HTML, video, carousel, playable and images.

Video ads proved to be preferred, which explains the ratio difference between video and image ads. Also, there was a rise in the adoption of HTML and carousel for the four games in 2020.

Playrix is laudable for its foray into playable advertising. After a mass release in October 2019, playable ads have accounted for around 20% of all time, and Playrix has invested and achieved significantly more in playable ads than any other advertiser.

As indicated by the data of main advertising networks over last year from SocialPeta, diversified networks were introduced for the promotion of TownShip, Fishdom, Gardenscapes and Homescapes, including global mainstream networks and local networks in different regions.

Nevertheless, Google Ads remained the primary network, followed by Facebook. In addition to its emphasis on mainstream networks, Playrix continued to test for more appropriate options.

In terms of ad publishers, on account of data analysis of the four advertisers’ advertising in the last 60 days, it can be concluded that Playrix’s recent advertising is mainly put on entertainment, simulation and puzzle publishers.

In view of the creative data on SocialPeta, the four games of Playrix, which have been released for more than three years, vary in both content and form over time.

Playrix obviously adds new elements and features to all of its games newly launched, which are highlighted by the building, plot, March 3, etc. in the ads. All possible presentation methods are explored in accordance with the game background and IP characters.

All four games feature IP characters with distinctive personalities, such as farm animals from TownShip, clownfish from Fishdom, and Austin the butler from Gardenscapes and Homescapes.

Also, Playrix launches advertising with holiday features in each holiday. For example, as the largest market for Playrix in the United States, a large number of Christmas special ads are launched on the market every Christmas.

Playrix as well puts a premium on localization, as illustrated by the fact that it includes Tang suit elements in its ads for the Chinese Lunar New Year.

Playrix’s UA team seems to have acquired new inspirations since early 2019, that is, to attract players with scene animation in which they continue the game by overcoming the dangers.

The creative is to feature the IP character and set two or three dangerous scenes for it. The character will then have to make the right choice to win the game.

The ad creative was not originally created by Playrix and was first launched by its competitor Matchington Mansion in late 2018.

Despite the lack of gameplay, Playrix followed closely to launch a large number of similar advertisements superior to Matchington Mansion, implying its effectiveness.

In the last year, this was the main form of the ad creative for the four games, which was as well adopted by a growing number of casual games.

Above all, Playrix’s UA team demonstrates an impressive strength. Except for exploring localization networks of advertising, it has been committed to trying diversified advertising types and creative, thus maximizing the possibilities through innovation with limited resources.