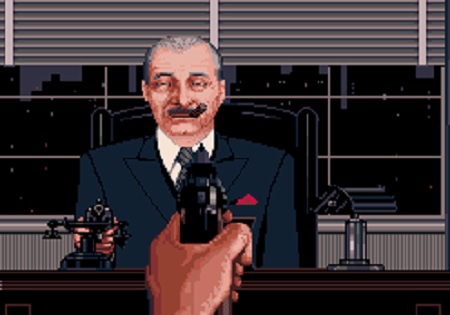 If you have been gaming for a long time and were one of those kids ho had the privilege to enjoy the Commodore Amiga and the games released on it, there’s a good chance that you know about The King of Chicago, an action adventure title set in the 30s.

The game, originally released in 1986, is set right after the death of Al Capone in Chicago. You’ll be controlling a gangster has he tries to fill the void left by Capone’s death and obtain power.

As such, you will be tasked with completing some really shady tasks that will consolidate your power in the criminal world and make you rise high like bribre officiers, keep your gang under control, perform drive-bys and many other not too clean assignments.

Unlike many other recent ports of older games, it looks like The King of Chicago is not going to feature any realy improvement or change, aside from the touch controls. This is definitely good for all those who want to experience the game in all its original glory.

The King of Chicago has yet to receive a set release date but it should be released before the end of the month. We’ll keep you updated as soon as something new comes in on the matter so make sure to keep you suit ready and your guns loaded!

The King of Chicago Launching On iOS Later This Month