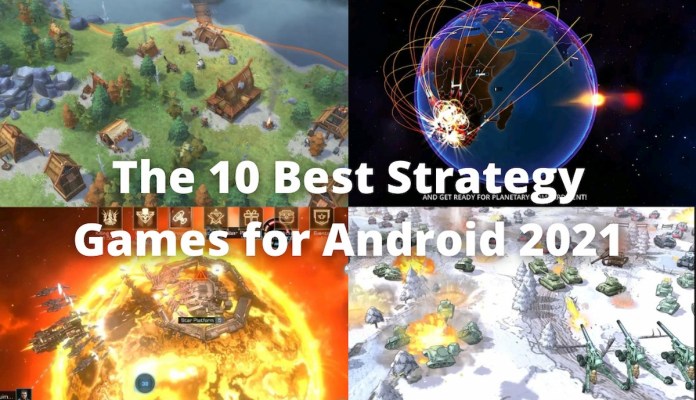 Strategy games have come a long way to become one of the most addictive genre on the mobile platform. One of the major reasons we love the genre is because of the basic premise that allows you to use your brain to beat your opponent.

Playing strategy games is a fantastic way to test yourself both against AI and real players in PvP in order to see just how creative you can be. So in this article we’ll be listing the best 10 strategy games that you can play on Android in 2021.

1 – The Battle of Polytopia

This is a unique turn-based strategy games that’s set in a strange flat world made of squares. The game lets you lead 1 out of 12 distinct civilizations to victory by getting resources and expanding your empire, researching various types of technologies and eventually become ruler of the world.

You can play in either single-player mode or play with others in multiplayer matches that allows up to fifteen players. Ultimately, this game is about fighting evil tribes, dominating new lands, mastering new technologies and ruling the world.

This is an RTS game that’s inspired by WW2. Players can join battles and jump straight into the action by the hands of allied forces on a campaign and try to defeat enemies coming from both left and right through a non-stop combat spree in various locations around the world.

Players will need to visit their base often as they’ll be fighting from one battle to the next. The base lets you do all sorts of things such as carrying out certain research investigations that’ll provide you with the strategic advantage when going into the next battle. You can also level up your units by increasing their HP as well as the amount of damage they can inflict.

3 – Dungeon of the Endless: Apogee

This is an exciting rogue-like dungeon defense game in which you and your team of heroes must protect the generator from your crashed ship. You’ll have to explore dangerous underground mazes to find your way to the next area and then try to get your crystal from the starting position all the way to the exit.

You can take control of a handful of characters that automatically attack any enemy they stumble upon in a current room.

This is an immersive next generation game that takes place in space. The game offers amazing 3D graphics and deep strategic choices to choose from. It’s up to you to discover the secrets of the galaxy.

This galaxy however, is filled with fantasy and conflict. You can start out the game by first repairing your Spaceboard and build your flagship to defeat space pirates, explore the galaxies, and form alliances with other space commanders.

Necromunda takes place in a world filled with outlaws, thieves, bounty hunters and gunslingers who are constantly pitted against each other as they fight for territorial control in the under-hive – a set of lawless ruins that’s located at the bottom of a high city.

You take control of a small gang that’s working its way up the ranks by building reputation, winning multiplayer tournaments in a challenging turn-based strategic gameplay.

First Strike is a fast-paced real time strategy game where you can play one of the twelve biggest superpowers of the world and strive to be the last one remaining when the entire world explodes.

You’ll need to plan your strategies wisely and build bombs or de-build to restructure your arsenal. You can also use research to gain access to new nuclear technologies, recon intel, automated self-defense sequences and lots more.

This is the latest RTS title on the mobile platform that inspires medieval European history and the stories revolve around the conflict between different nations. The game’s basic concept involves creating a powerful strategy and use various tactics to win the respective wars and resolve the conflict.

The game contains two campaign modes where players will need to spend time building their army. You’ll also need to create a strategy, collect the necessary resources and get ready your troops for battle. The game offers solid gameplay mechanics that most players will enjoy and appreciate.

This game lets you take control of one of the most technologically advanced army in the imperium. You will be tasked with leading the expedition on the newly discovered Necron planet.

You can customize your team, manage resources, discover long lost and forgotten tech and also control your tech priest’s every move. Every choice you make will shape the missions to come and ultimately decide the fate of your troops.

Northgard is a game of exploration, resource management and land acquisition. The game will task you to establish and expand a thriving Viking settlement that involves constructing specialist buildings whilst maintaining production loops from both humans and mythological beings along the way.

There’s a lot to admire in this game as its packed full of tough decisions and different types of strategic riddles. The multiplayer mode also allows you go head to head with up to six players.

This is an idle strategy game that challenges you to collect unique heroes, battle the shadow forces and reclaim the Oasis. The game offers high-quality 3D rendered hero models and a fascinating vivid world.

The most exciting part about Valor Legends is that every battle takes place in real-time. There are hundreds of heroes available to choose from, train, and summon and challenge evil forces. The also offers an auto-idle feature that lets your forces remain idle while you’re away.